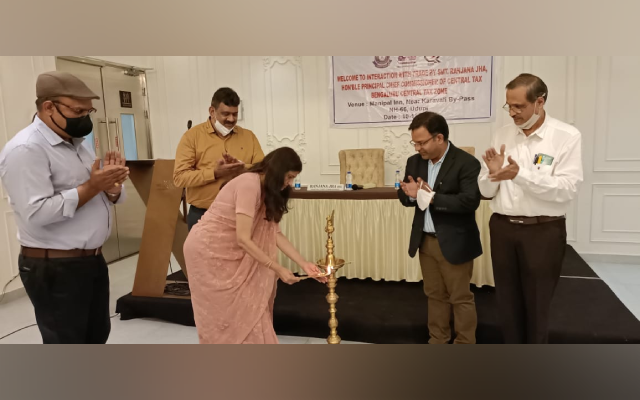 During this interaction, the taxpayers and the representatives of the trade conveyed their gratitude for such outreach programmes that are being organised by the government, in the recent times. Many taxpayers felt that this has helped in building the mutual trust between the tax administrators and the taxpayers.

They also raised a number of queries pertaining to GST law in general and the decisions taken in the 45th GST council meeting in particular. They also gave several representations to the Principal Chief Commissioner, who assured them that all their representations will be examined and will be taken further to the policy making level, to arrive at a national level solution to the problems faced by the businesses.

During her address to the taxpayers, she also emphasised and explained the taxpayer friendly measures taken in the 45th GST Council Meeting. She spoke about how the tax departments and the taxpayers can work together for the development of the nation as a whole, to reach our goal of becoming a 5 trillion-dollar economy soon.

She also lauded the Mangalore Central Excise and Central Taxes Commissionerate on achieving, and in fact exceeding the fixed target revenue collection.

The Commissioner of Central Excise and Central Taxes (GST), Mangalore, Imamuddin Ahmad, IRS, was also present during these interaction sessions.

In his address, he elucidated the measures taken by the department during the pandemic to aid the taxpayers in getting their businesses back on track. He also mentioned that Mangalore Commissionerate is an IS 15700:2018 certified commissionerate and is committed to ensure quick grievance redressal and transparency.