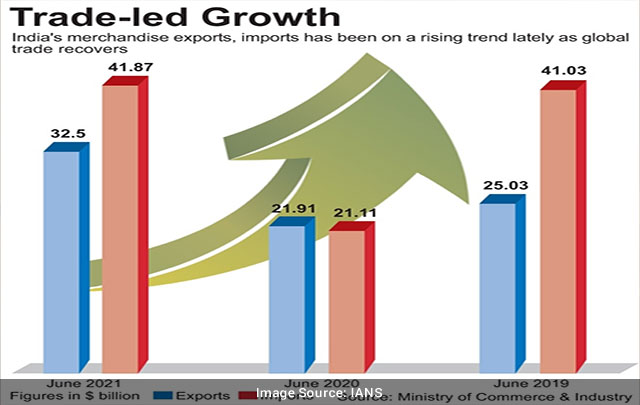 As per the data, the value of non-petroleum and non-gems and jewellery exports in June 2021 was $25.65 billion, as compared to $18.48 billion during the corresponding month of 2020, registering a positive growth of 38.84 per cent.

“As compared to June 2019, non-petroleum and non-gems and jewellery exports in June 2021 registered a positive growth of 33.42 per cent,” an official statement on foreign trade said.

“With surging exports and relatively subdued gold imports in May-June 2021 dampening the aggregate trade deficit to a three-quarter low US$31 billion in Q1 FY2022, we expect the current account to revert to a small surplus in that quarter,” said ICRA’s Chief Economist Aditi Nayar.

“In line with the sequential recovery displayed by most high frequency indicators, non-oil non-gold imports rose in June 2021, reflecting a pickup in demand with the gradual unlocking as well as the high commodity prices.”