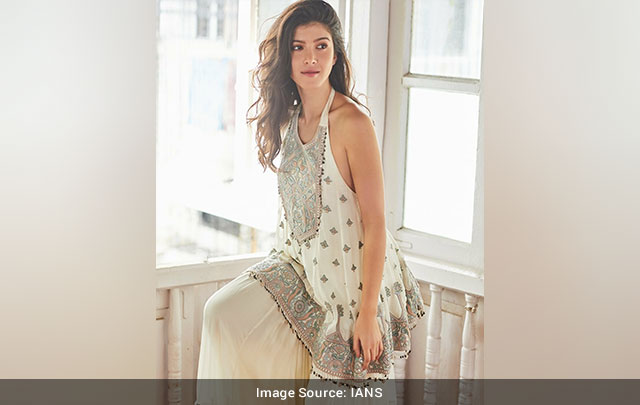 “I’m extremely excited and looking forward to shooting the film. I have been doing several readings with my director, and been having lots of discussions on my character brief and breakdown of the scenes,” says the new kid on the B-Town block, in an interview with IANS.

Shanaya’s first film is directed by Shashank Khaitan and, like the debut projects of many industry kids lately, will be produced by Karan Johar’s Dharma Productions. She is cast opposite actors Gurfateh Pirzada and Laksh Lalwani in the film, a rom-com love triangle.

The debutant actress has been preparing for the film before it goes on the floor after lockdown gets over.

“I think understanding the skin and honesty of a character is important,” she says. Before her debut film, Shanaya worked as an assistant director on the Jhanvi Kapoor-starrer “Gunjan Saxena” to understand filmmaking and how film sets function.

Her father Sanjay Kapoor has lately been a regular on the digital space, he was seen in “Lust Stories”, “The Gone Game” and “The Last Hour”, and has “Finding Anamika” coming up.

Shanaya picks her favourite from her father’s recent works. “In my opinion, one of my favourites of my father is Lust Stories. The character my father played had layers, and I think it was cracked extremely well!” she says.

Sanjay featured in Dibakar Banerjee’s segment of the anthology film alongside Manisha Koirala and Jaideep Ahlawat.

On the web series “Fabulous Lives Of Bollywood Wives”, during Shanaya’s debut, the audience got to see Sanjay Kapoor being possessive about Shanaya’s boyfriend at “Le Bal” in Paris while her mother Maheep was mellower.

Shanaya stifles a laugh recalling the episode. “Like all parents are, I guess! My dad never asks or wants to know, but he is very protective,” she says, adding: “My mom is like my best friend, so she asks me a list of a minimum of 100 questions before I leave and come back from the date. But I wouldn’t say they annoy me much.”

Her Bollywood debut will follow but Shanaya is already a social media sensation. She has a fan following of 741k on Instagram.

“Social media and interacting online has become really big,” observes Shanaya, who will be seen in an upcoming video on the Bumble dating app along with her mother Maheep Kapoor. In the fun video, Shanaya and Maheep will bond over making the first move and spill some fun secrets and life truths.

Talking about dating apps, Shanaya sums up: “I don’t use a dating app but I think it’s pretty awesome. I heard about dating apps when I was 17. It’s really cool as you can really get to know a person online before you go and meet them.”