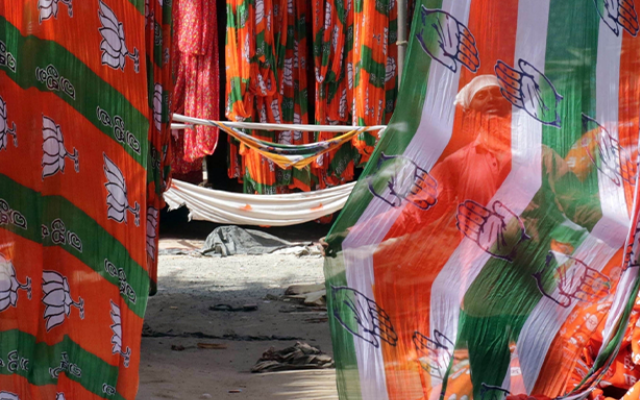 New Delhi: Speculation over G-23 leaders meeting BJP leaders has set tongues wagging that many of them are drifting towards the ruling party after being ignored by the Congress during the Rajya Sabha polls.

Some of the dissenters have already crossed over to the BJP including Jitin Prasada who is now a Minister in the Uttar Pradesh government.

The group is lying low after being completely sidelined in the party except for their presence on a few committees. Their leaders are unhappy after not being given a chance for the Rajya Sabha for which they were hopefuls.

The speculation also gained ground after information spread of Anand Sharma meeting BJP President J. P. Nadda but the senior Congress leader and a G-23 member denied meeting Nadda. The meeting was said to have taken place on Thursday. Sources said that Sharma spoke to Nadda over the phone on a programme related issue where both of them are invitees.

After the news spread, Sharma tried to put all speculation to rest and said as Nadda hails from the same State and university they have social and family ties. He said that the Himachal University alumni had invited both of them to a programme. Both spoke about it. There were only ideological differences but no personal enmity, he added.

He asserted that if he had to meet Nadda he would do so openly. Sharma is a prominent leader of the Congress and an important member of the G-23, which has been pushing for reforms in the party.

Sharma has been maintaining a distance after being ignored for the Rajya Sabha. Most recently the majority of members of the group were absent from the ‘Satyagraha’ called by the Congress party against the Enforcement Directorate (ED), which has been questioning former party president Rahul Gandhi in the National Herald case.

Meanwhile, Congress leader Tarvinder Singh Marwah joined the BJP on Wednesday. Marwah later appealed to all the G-23 leaders of the Congress to join the BJP.

He was a member of the Delhi Assembly for three terms from 1998-2013 and also served as parliamentary secretary to the chief minister.

Marwah said that in the last Delhi Assembly elections, Union Home Minister Amit Shah had asked him to contest on a BJP ticket. “Devoted my whole life and youth to the Congress party. But there is no respect for workers who gave everything to the party. People whom nobody knew are made general secretaries in place of hardworking workers. Rajya Sabha seats were given to the people who lost the elections. People who cannot be appointed as even peons are given key responsibilities,” Marwah said.

Pointing towards the G-23, Marwah said they are not going to get anything as the leadership does not see their dedication and sacrifices for the party. “G-23 leaders must join the BJP as they will get the respect they deserve here.”

The former Congress MLA claimed that the Congress leadership is completely disconnected from the cadre. “I have been seeking time for one and a half years to meet Rahul Gandhi, but failed to get an appointment. They are not meeting any workers,” Marwah added.

Tension has been building up within the Congress since the names of veteran party leaders like Ghulam Nabi Azad, Anand Sharma and Veerappa Moily did not figure in the Rajya Sabha candidates’ list.

The Congress has tried to accommodate them in various form like the political affairs group, Task Force 2024 and the committee for the ‘Bharat Jodo Yatra’.