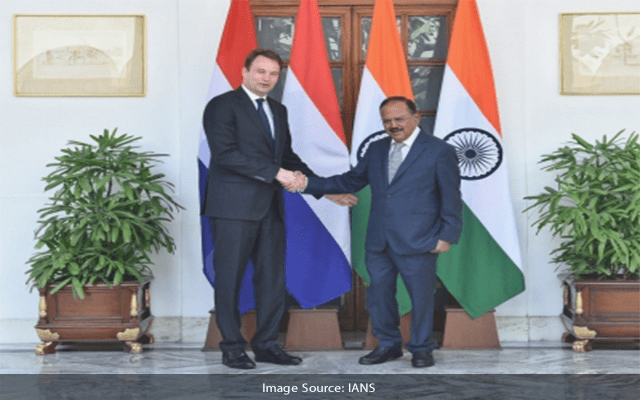 Leeuwen, Security and Foreign Policy Advisor to the Prime Minister of the Netherlands also discussed various bilateral issues and the ongoing Russia-Ukraine war.

This year marks the 75th anniversary of the establishment of bilateral relations between the two sides.

To commemorate this milestone, President Ram Nath Kovind is paying a State visit to the Netherlands From April 4-7 at the invitation of the King and Queen of the Netherlands.

Doval and Leeuwen discussed recent geopolitical developments in their respective regions. Both of them underlined the importance for India and the Netherlands to remain engaged on these issues and intensify their contacts, including through policy dialogues on issues of mutual interest.

The two also agreed to strengthen further the partnership between the two countries by expanding ongoing defence, security and counter-terrorism cooperation. They agreed to stay in close touch.

To celebrate strong political, economic and commercial relations, a large number of events and activities are planned during the year in a wide range of areas of cooperation, including water, agriculture, innovation, energy, climate and culture, the Ministry of External Affairs has said in a statement earlier this month.

The Ministry also stated that the Netherlands presented 3,000 fresh tulips to India, as a symbol of friendship, which were planted in the Jawaharlal Nehru Bhawan gardens.

The core of bilateral connections between the two countries is trade and business cooperation.