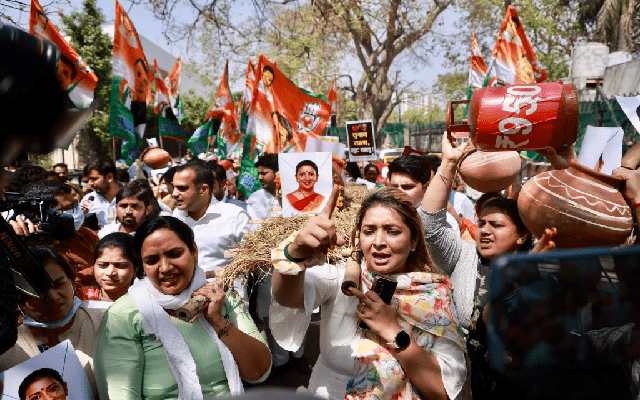 New Delhi: The Youth Congress on Tuesday March 29 staged a demonstration outside the Petroleum Ministry against the hike in fuel prices across the country with petrol crossing Rs 100 a litre in the national capital.

President of Indian Youth Congress Srinivas B.V.A said that the burden of inflation is increasing by the day on the people. Ever since the elections got over, the people’s “bad days” have started. Intoxicated by power, the government is only engaged in doing good for itself and its friends. Neither can they see the difficulties of the people, nor are they concerned about it.

The leader alleged that the actual reason behind the rise in oil prices is well known to the public. The government should understand that nothing can be achieved by repeatedly blaming others for its failure. The trust and confidence of the public has completely eroded from the Modi government.

The leaders participating in the agitation said that the public is paying a heavy price for believing on the false promise of “good” days. Indian Youth Congress demanded that the Centre immediately roll back the increased prices on petrol, diesel and gas cylinders.

Prices of petrol and diesel has been hiked seven times in eight days. While the price of petrol was increased by 80 paise, that of the diesel was hiked by 70 paise per litre.