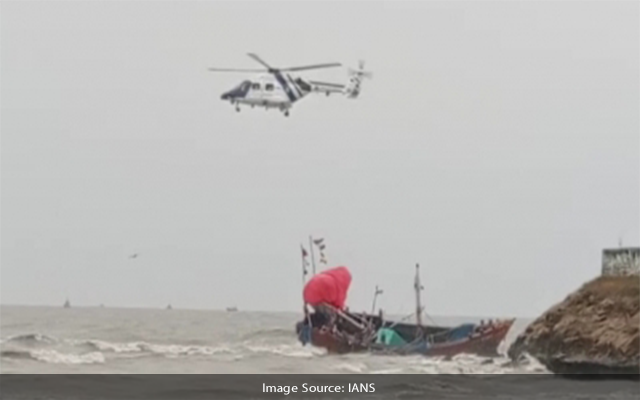 Gandhinagar: The Indian Coast Guard (ICG) on Thursday received information about an incident of drowning of fishing boats and missing fishermen off Gir-Somnath coast of Saurashtra region of Gujarat owing to unfavourable strong winds and turbulent seas. At least 8 to 10 fishermen are believed to be missing. The Coast Guard immediately launched a search and rescue operation in the area.

The Indian Coast Guard on Thursday received info of sunk fishing boats at Navadra, Una Harbour-mouth due to bad weather. According to defence sources, the ICG immediately launched a search & rescue operation in the area sending IBs & Helicopters. Other ICG assets are also being mobilized, informed the ICG.

The boats involved are Gauri Nandan, Dhanvantari, Shiv Priya, Hari Prasad and Al Faizan. An aircraft of the Indian Navy is also active.

The India Meteorology Department (IMD) on Thursday issued a bulletin warning the fishermen against venturing into the sea. The warning has been issued for the next four days.

In association with the trough at mean sea level which runs from the cyclonic circulation over south east & adjoining east central Arabian Sea to Kutch across north east Arabian sea extending up to 1.5 km above mean sea level, squally weather very likely to prevail along and off South Gujarat coast.

High waves in the range of 1.5 – 3.2 meters are forecast up to December 3 along the coast of Gujarat from Diu to Okha and from Mandvi to Jakhau. Surface Current speeds vary between 40 and 95 cm/sec.

Through unconfirmed sources, it is learnt that five fishermen swam to save their lives. They were rescued and taken to Nava Bandar coast. They were taken to medical care facility as they had suffered injuries.