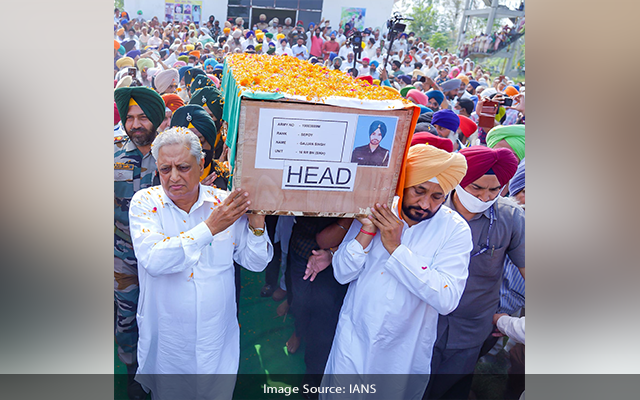 Chandigarh: Lending his shoulder to the bier of the martyr, Punjab Chief Minister Charanjit Channi on Wednesday October 13 paid tributes to Sepoy Gajjan Singh (26), who was cremated at his native village Pachranda in Nurpur Bedi in Ropar district with full military honours.

Accompanied by Assembly Speaker K.P. Singh, the Chief Minister laid wreath and participated in the ‘ardas’.

Channi also accompanied the martyr’s nephew and his father to lit the pyre of the braveheart who made the supreme sacrifice in the line of duty in a gunfight with the terrorists in Poonch sector in Jammu and Kashmir on October 11.

Sharing his sympathies with members of the bereaved family, the Chief Minister said that Gajjan Singh’s unprecedented sacrifice would ever inspire his fellow soldiers to perform their duties with utmost dedication and commitment to preserve the country’s sovereignty and integrity.

Married eight months ago, Sepoy Gajjan Singh was youngest of four brothers and had joined the army nine years ago.

He got married in February and his picture in wedding attire, holding a farmer union flag, was widely circulated on the social media.

The martyr is survived by his wife Harpreet Kaur and parents — Charan Singh and Malkeet Kaur.