Prayagraj: The Prayagraj unit of the Special Task Force (STF) has arrested the Principal of Dr. K. N. Katju Inter College, and an assistant teacher on charges of cheating.

Deputy SP (STF) Navendu Kumar told reporters that the principal, along with his accomplices, had planned to provide a solved paper to his daughter who was also appearing for the post of assistant teacher.

The examination of the aided junior high school principal and assistant teacher’s post was held in two sessions across the state.

Tiwari told the STF that the he, on the directives of the principal, had sent the photo of the question paper to Khare and Anugrah when it was opened in the examination room.

He further said that they had sought the paper’s photo so that they could give it to the solver and then provide the solved answers to Akanksha at another examination centre. 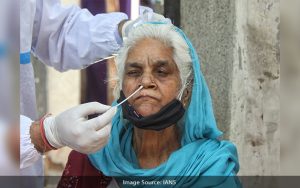