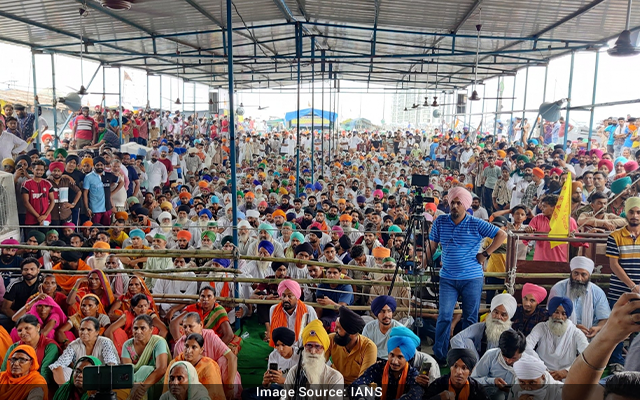 Lucknow: In a massive farmer outreach exercise, Uttar Pradesh Chief Minister Yogi Adityanath will on Sunday address around 25,000 farmers at a Kisan Sammelan in Lucknow.

The Kisan Sammelan is a part of ambitious programme ‘Mission Kisan Kalyan’ of the state government.

During the event to be held at the Defence Expo Ground, the Chief Minister will interact with the farmers and an exhibition will be also organised.

The distribution of agricultural tools, kisan credit card, and soil health card will also take place at the event.

A government spokesman said: “The Yogi Adityanath government has transformed the agriculture sector in Uttar Pradesh with its commitment to pay double their income of farmers. A record payment to over Rs 1.44 lakh crore has been made to more than 45.74 lakh sugarcane farmers in the state in the last four and a half years.”

“The government has also waived off loans of 86 lakh small and marginal farmers to the tune of Rs 36,000 crore. More than 433.86 lakh metric tonnes of food grains have been procured by the government and over 79,000 crore have been paid to about78,23,357 farmers.”

Under the Pradhan Mantri Kisan Samman Nidhi Yojana of the Central government, around 18 lakh farmers have been given Rs 32,521 crores.

Similarly, more than 2 crore farmers are associated with the Pradhan Mantri Fasal Bima Yojana and a compensation of Rs 2,376 crore has been given to more than 25.60 lakh farmers under this scheme.