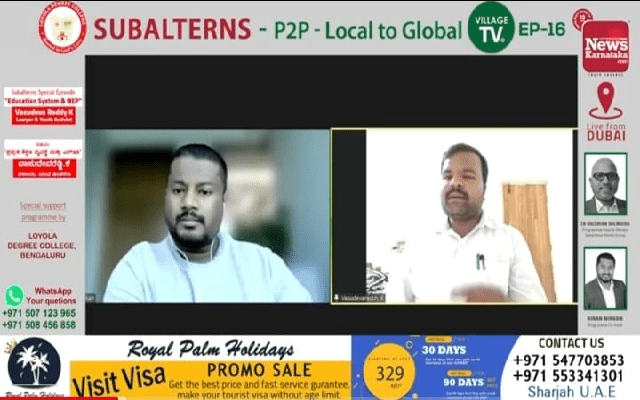 The event host was Spearhead Media Group Mentor and Advisor CA Valerian Dalmaida, and the co-host Kiran Nirkan. The weekly programme is aired in Kannada.

The goal of ‘P2P – Local to Global’ is to provide a platform for unheard young voices in society and thereby create a supportive environment.

Lawyer and Activist Vasudeva Reddy K. was the guest speaker for the day.

Speaking on current education system Vasudeva Reddy K. said, “Education is always a weapon in the hands of ruling classes. Current education In India is ruled on the principles of Capitalism and Brahmanism. Education today has become a root for discrimination. Bringing in an evolution in the existing irrational, unscientific and inhuman system should be our main motive,” he opined.

Education has become an asset of ‘haves’ and a strategic move on sidelining poor and middle class from attaining a standard education is practiced through commercialisation of education, he said.

Condemning the Prime Minister’s talk on questioning the need of Indian students to study abroad he statistically explained, In India total of 8 lakh students have cleared the NEET examinations but the total number of medical seats available in India is just 89,000 and called NEET exam an elimination game to sideline poor and middle class from higher education.

The elimination of UGC system through NEP will lead to the question of monetary assimilation of colleges. And so, students will turn out as the customers in colleges and the one capable of paying money will be the only eligible to attain education. In a time where 77 percent of population are spending less than Rs. 27 per day, I fear we will be the first and last generation to avail higher education in our country, he concerned.

Nationalisation of Education rather than Privatisation should be the primary aim with the policy of ‘Education for All and Job for All’, he said.

As part of concluding note, he said, Struggle against the ruling parties is never anti- national. Let’s abide by the Constitution and let all the parents and students understand that ‘Today, our Health, Education, Defense, Tax’, in total our life is decided by politics and so let’s put our hands together for clean politics which makes our life a peaceful one and lets not be a scape goats to communal politics.