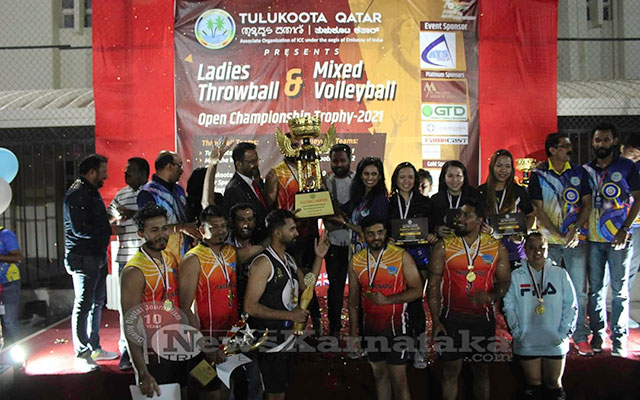 Doha: Tulukoota Qatar, a renowned frontline Interfaith, Socio-cultural community group under the aegis of ICC affiliated to Indian Embassy, for the first time in the history of Qatar has successfully conducted ‘Ladies Throwball and Mixed Volley ball’ tournament with players from Multiple nationalities and different states of India, on 2ndand 3rd December 2021 at Cambridge School ground Abuhamour-Doha.

Tournaments began on 2nd December from 7.30 pm with league matches conducted simultaneously both Throwball and Volleyball on adjacent courts and Semi-final and Finals were concluded on 3rd December followed by a Gala closing ceremony and grand prize distribution.

Meanwhile, Eight mixed volleyball teams with national and International players – TKQ-1, TKQ-2, GVB, GVB2.0, Topnotch, VoliQ, Team Tamilnadu and Volleybros participated in the tournament. After the exciting league matches TKQ-2, VoliQ, Tamilnadu and Topnotch emerged as semi-finalists from the 2 pools A and B. The finalists were Team Tamilnadu and Team Top Notch, after a nail-biting 3 set match Team Tamilnadu lifted the Champion trophy and Team VoliQ were the Runners-up. The audience thoroughly enjoyed the matches.

A grand prize distribution ceremony was compered by Kiran Anand Advisory TKQ and General Secretary Naveen Shetty proposed the vote of thanks.

After a lot of fun, entertainment and photo session audience went home with lots of sweet memories.