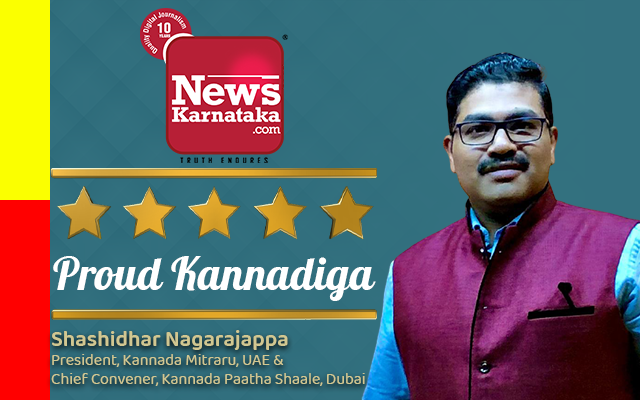 Hailing from Baharamasagara Village, Chitradurga Taluk in Karnataka, Shashidhar Nagarajappa is the third child and the youngest in his family. He is Kannada Paata Shaale’s Chief Convener and by profession Sales and Deputy General Manager of Daewoo Electronics Middle East FZE in Dubai, UAE. His contribution through the Kannada Mitraru organisation in bringing Kannada literacy among children in Dubai has garnered him appreciation from Kannadigas. As a proud Kannadiga, he has been striving towards bringing Kannada language to the forefront wherever he goes.

Being born in a teacher’s family Nagarajappa aspired to become a teacher during his college days. His father worked as a teacher and retired as a Headmaster of Government High School in Bilichodu. His mother is a homemaker. “We are a small family having an agricultural background. My grandfather was a farmer. My father was the first person to get a government job. He had a very successful life,” he said.

Growing up in the village he did his schooling in his native and then went for higher education in Bengaluru. He did BA in English Literature from Government Arts College and an MBA from Central College. “After that, I worked as a Corporate Account Manager for Zenith Computers. Later, I received an interview call from a company in Dubai one day. I had planned on heading there to see how things were going since I had been asked to join the company. I decided to decline the offer, but after three months, they called me back and I joined the company,” said Nagarajappa.

He further said that he arrived in May 2002 and worked for Al Hadi Electronics for two years before switching to Daewoo Electronics. “I have been with the company for 20 years. I started as a sales executive and now I am the company’s Sales Director. I’m in-charge of the Middle East and Africa,” he added. 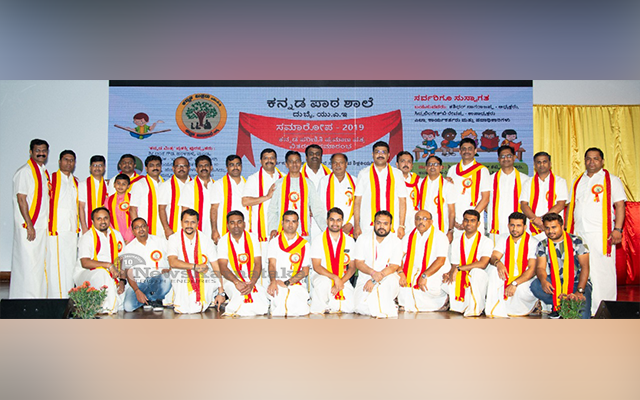 “I didn’t know anyone in Dubai when I first arrived. I now know thousands of people. Listening to a Kannada word was a festival at the time. That was a wonderful experience for all of us. During that period, I met a few people from my village. I was later connected to the Karnataka Sangha Dubai from there. Then I volunteered to work for the organisation and they were grateful for my efforts in hosting the events. My social connection with the organisation began following this,” he explained.

Why a shift from Arts to business?

“I come from a family of teachers. That initially influenced me and motivated me to pursue my dream of becoming an English lecturer at a college. As a result, I chose to pursue a BA in English which had a greater scope at that time. When I moved to Bengaluru to finish my degree, I considered switching to a different field that would allow me to pursue my goals. When I told my father that I wanted to change my major, he encouraged me,” explained Nagarajappa.

When asked about how supportive was his family of his career he said that he is the luckiest to have such a great family. “My father and mother constantly encouraged me to pursue my goals. My father used to spend money on me because he had confidence in me. Even my siblings knew that I have done well in my studies and was progressing in my career. They too supported me throughout,” he said.

Shashidhar Nagarajappa started an organisation called Kannada Mitraru, which was initiated by him along with his friends who came together for a common cause. “We were all Kannada literates. We realised that if we don’t take an initiative in teaching Kannada, our kids were going to be illiterate when it came to Kannada. That is how Kannada Mitraru was formed,” he mentioned. 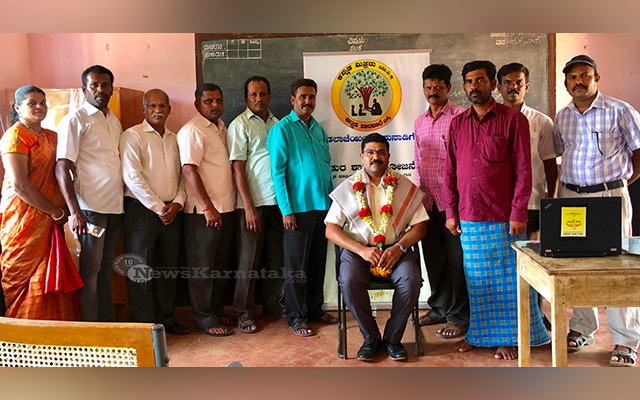 A group of 60 people came together and started the organisation in Dubai with 40 people among them being from JSS School. He said that “We met Sri Shivarathri Deshikendra Mahaswamiji and informed him of our plans. He told me right away that we could do it for free at the school. That is how we started the initiative in the year 2014. Currently, we have 475 students.”

He went on to say that, “We have organised the lessons in the same way that physical schools do: Prathamika, Madhyamika, and Prouda. Students are divided into several sections based on the number of students in the class. We only have 30 students in each class, and if there are any more, they will be moved to the next session.”

“We are particularly concerned with the growth of the Kannada language. In the Gulf region, we are presently taking classes online and it takes place in GCC over the same weekend,” he added.

Apart from the activities listed above, he said that they have been assisting Kannada schools in Karnataka by providing them with Smart-class equipment such as printers, projectors, and computers. “Every year, we identify needy Kannada schools and visit them in person to ensure that all assistance reaches them without delay and make sure that Kannada teaching is also upgraded in our native.” 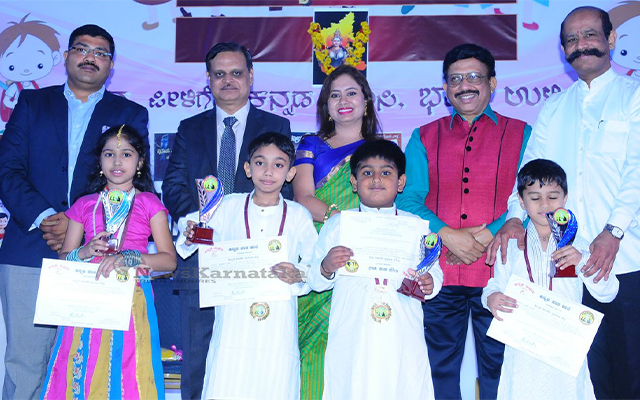 “As part of the Covid relief effort, every member of Kannada Mitraru and Kannada Paata Shaale volunteered to help the needy by distributing food,” he added.

Shashidhar Nagarajappa is the recipient of many awards. “My first recognition came from my village when I was honoured by my people during a festival and it was given by Chitradurga Thunga Matha Swamiji. During Karnataka Rajyotsava events, the Karnataka Sangha recognised me. I received the Vishwa Manava Award from the Vishwa Kannada Sammelana. The activities of our organisation were recognised by the Karnataka Sangha in Dubai and Abu Dhabi.”

“Every child’s right to mother-tongue literacy should never be withdrawn or taken away from them. They have no idea which language they are learning when they are children. If you are a Kannadiga, you should make it a point to teach Kannada to your children so that they are connected to your roots. They know who you are, your father, your grandparents, and when it comes to culture, they can only find it out through our native language. The only treasure we can pass on to the next generation is teaching our children the mother tongue,” he concluded.