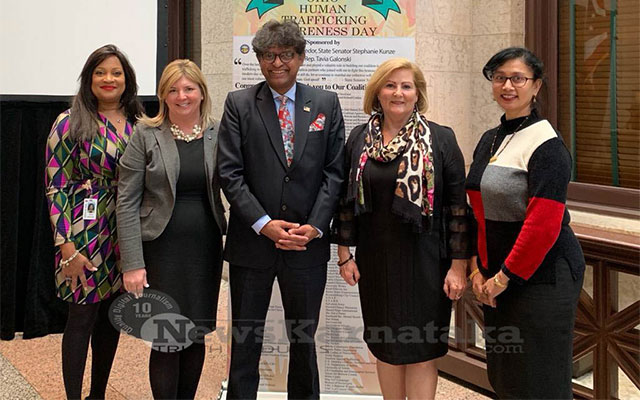 …Desire changes nothing,
decision changes something,
determination changes everything…

Harold D’Souza an international inspirational survivor-advocate spoke at the 13th Annual Human Trafficking Summit hosted by Ohio Senator Teresa Fedor. The Summit brought the Ohio Statehouse into your home, gathering advocates from around the country with one mission: “ending human trafficking in all forms.”

Senator Fedor said, “It is beyond time for Ohio State to re-imagine its definition of justice and evolve its approach to better protect and rescue all who have been impacted by human trafficking. We have come a long way to end human trafficking in Ohio but there is more to do to support survivors – ensuring that they have access to housing, social services, and employment”.

On ‘Survivors Perspective Panel’ D’Souza shared his lived experiences on three sessions beginning with, ‘Human Trafficking Survivor Mental Health Impact, Struggling in Silence, and Human Trafficking of Males’. D’Souza spoke, ‘All survivors should thrive. For male survivors, it is a stigma. Living in fear is not a choice but fighting for freedom is a solution’.

‘My wish is that this endeavour will be a catalyst for informing, uniting and transforming Ohio. My hope is that your commitment will be life changing’ spoke Representative Tracy Richardson.

Harold D’Souza, President of Eyes Open International has definitely exemplified the epitome of what community members are challenged to do during this pandemic period to end modern-day slavery.

Representative Tavia Galonski said, ‘Human Trafficking is one of the fastest-growing criminal industries in the world and has been reported in all 50 States. The prevalence of human trafficking in Ohio is only part of the problem. We must also do more to protect at risk individuals and support survivors of human trafficking throughout the recovery process’.

Bajpe to Bollywood, Hell to Hollywood, and from slavery to The White House is an incredible real-life story of resilient Harold D’Souza native of Bajpe, Mangalore.