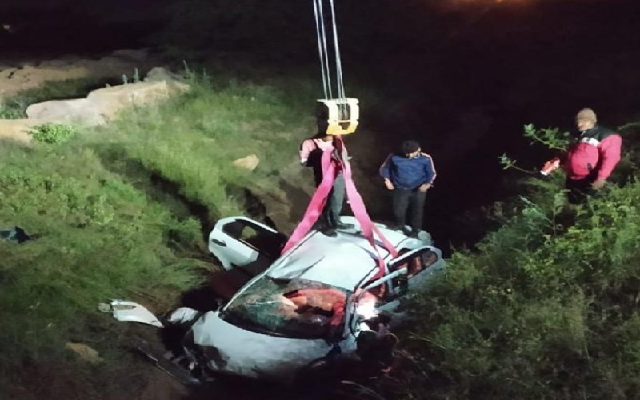 Bagalkot: Four persons died, and two others were injured after a car fell into a canal near Halaki Village on Friday October 22.

The deceased are identified as Sunil (24), Mahadevagouda S Patil (27), Mounesh Kumbar (26), and Shivanand Latti (26). It is said that they were friends and residents of different villages of Ramadurga Taluk. The two injured are Iranna Ghatti and Farhan Athiq, who are also residents of Ramadurga.

According to police, “all the six youngsters were travelling in the same car. The accident occurred while they were heading to Ramadurga after attending a private function at Mudhol. It is reported that the driver lost control of the vehicle and the car fell into a Halaki canal that was next to the road. The accident was so intense that four people including the driver breathed their last on the spot.”

“In the accident two people suffered severe injuries and have been admitted to a private hospital in Mudhol. With the help of a crane, the car was removed from the canal in the hours,” added police.

A complaint has been registered in Lokapur Police Station. A police inspector said that, “It is too early to say whether the driver and youth in the car were intoxicated. It will be known after the autopsy and investigation is underway.”

It may be noted that in the last one week a total of ten people have lost lives in accidents in Bagalkot and Vijayapura Districts.