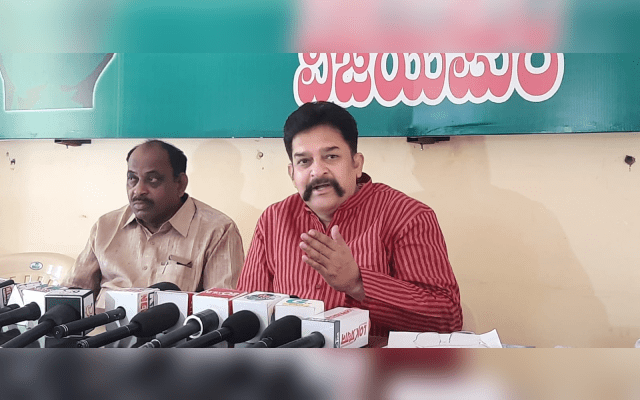 Vijayapura: Taking strong exception to the ongoing controversies over Hijab, as well as Halal meat and forcing Muslims traders not to do business near temples, Legislative Council Chief Whip Prakash Rathod said that since the ruling BJP has no achievements of developments to its credit, the party has been  deliberately raking up controversial issues to hide its failures.

Addressing mediapersons at the Congress party office on Monday April 4, he said that such unnecessary issues are only aimed at dividing the society along religious lines and to create some vote bank. “But the BJP has forgotten that in the process of doing so, they are severely damaging the image of brand Karnataka which has been made in the world in the IT/BT sector,” he said.

Referring to the recent tweet of industrialist Kiran Mazumdar Shaw who has expressed displeasure over the communal incidents taking  place in the State,  Rathod has said that the BJP Government must do course correction in order to retain the brand Karnataka image. Rathod claimed that already a few companies which were planning to establish their firms in Karnataka, have shifted to Tamil Nadu because they feel that Karnataka no longer has a conducive atmosphere for setting up new mega enterprises.

Referring to Halal meat controversy, he said that Karnataka is known for religious harmony but the organizations supported by the ruling BJP Government are destroying it by raising issues such as Halal meat.

Replying to a question, he said that recently a delegation of the Congress members met the Governor to convey the message on the deteriorating law and order situation in the State. Criticising Chief Minister, Basavaraj Bommai for giving free-hand to trouble mongers in the name of protecting religion, Rathod said that it was never expected from Bommai,  who has come from a Socialism background. He has now become a complete puppet in the hands of RSS, he asserted. “His father, late. S. R. Bommai had given good administration and never played communal politics. But today, his son has disappointed the ones who were hoping for a good administration from Bommai,” he said.

On the  issue of development of the District, Rathod alleged that projects such as 24/7 drinking water are still limping in the City even after years. He said that he had raised several issues during the recently concluded session on pending development projects of the District but the Government did not give any satisfactory reply.