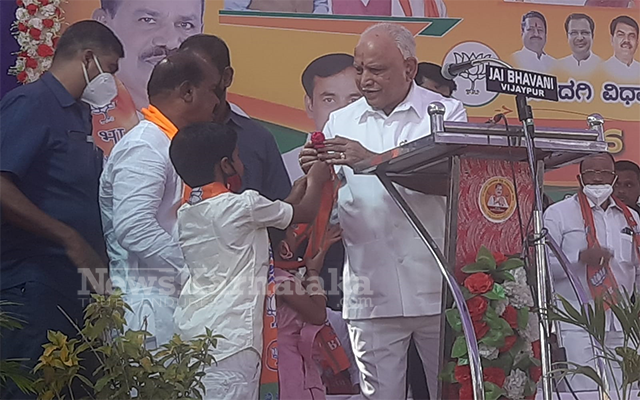 Vijayapura: Claiming that the Congress is a sinking ship, Former Chief Minister B. S. Yediyurappa said that it is no longer the Congress which was established by Mahatma Gandhi.

Addressing a public gathering at Tamba village of Sindagi constituency on Thursday October 21 while campaigning for party candidate Ramesh Bhusnur, he claimed that Gandhiji had asked the then Congress leaders to dissolve the party after the independence, but the Congress leaders did not heed hsi words.

Yediyurappa said that the Congress leaders are living in illusion and claiming that it is their party that has brought freedom to India, he said.

Stating that the Congress has no leader and that their own party workers are struggling to find the leader, he asked whether the people want leaderless parties such as the Congress or BJP which has brought glory to India at international level.

Replying to the allegations of the Congress that the BJP Government has reduced ration rice from 7 kg to 5 kg, Yediyurappa defended the reduction stating that though the quantity has been reduced but other benefits are being given to people. He added that even the present rice being distributed under the Public Distribution System (PDS) is supplied by the Modi Government, therefore, the Congress cannot claim credit for Anna Bhagya scheme.

Accusing the Congress of spreading canards that the BJP is an anti-Muslim party, he claimed that the BJP has not stopped any scheme meant for the welfare of Muslims. “The party does not discriminate between any communities. We treat every community equally,” he said.

Yediyurappa urged the people to vote against the Congress which has disgraced PM Modi.