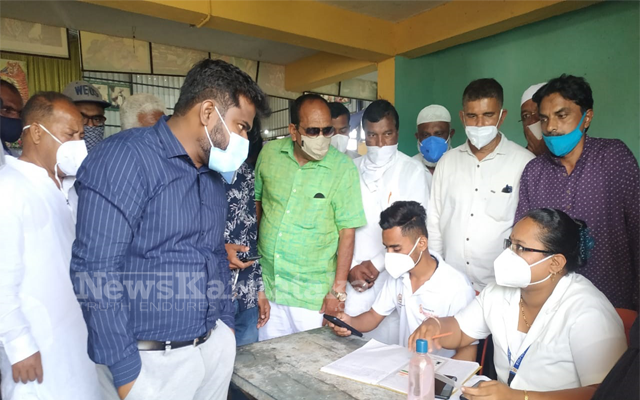 Vijayapura: The ambitious Vaccination Mela to jab 1 lakh people of the district in a single day was launched intensely on Friday September 17.

The District Administration has made elaborate arrangements for the success of the event.
“We have been preparing for the mega event for the last four days after receiving direction from the Chief Minister who has set the target of vaccinating 30 lakh people in the State.

Similarly, Vijayapura District was given a target of vaccinating 1 lakh people on the day,” said Deputy Commissioner P. Sunil Kumar. He said that as part of the preparations, meetings were held in Vijaypura taluk, Indi, Sindgi, Muddebihal and Basavanabagewadi Taluks where required arrangements were made for the success of the event.

“We have involved Gram Panchayat officials, revenue officials and health officials for the event. Extensive awareness programmes were held across the district to ensure that more people visit the vaccination centres on the day,” he said.

Stating that special task forces were constituted for the purpose, he said that NGOs such as Sambhav and Azim Premji Foundation have offered manpower for the event. He said that 547 centres have been opened in the district for the vaccination.

Expressing confidence that the district will reach the target of vaccinating 1 lakh people, Sunil Kumar however said that the total data could be available late in the evening as the vaccination will continue even after evening and uploading of data in Cowin app may also might take time.

“However, we have directed the staff to upload the data in the Cowin app at the maximum by 11:00 pm,” he said.

Claiming that already 87 % population of Vijayapura City has taken at least one dose of vaccine and all the people above 45 years too have taken vaccine in the City, he said that it is an encouraging response.

Admitting that some reports are coming from the district that a few people are assaulting health staff who have gone for vaccination work, Sunil Kumar made it clear that tough action will be taken against such people who prevent officials from discharging their duties.

“It is the duty of the citizens to cooperate with the officials as they are doing their job of ensuring vaccination to all eligible people. No one has the right to assault or misbehave with the staff,” he said. He however said that such are only sporadic incidents while majority of the people are convinced that vaccination is important.
Sunil Kumar appealed to the people to take vaccines without fail. It has proved that the vaccination saves people from losing life to Covid, he said.

To a question, he said that district administration will continue to do such mega melas every week if the government orders.