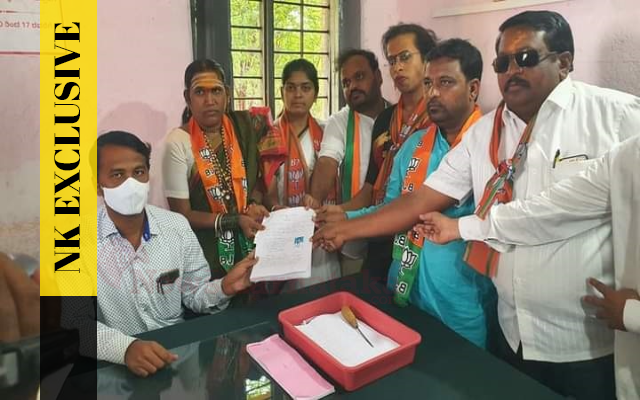 Vijayapura: Going against several odds and facing resistance from the society, Malkappa Metagar, a transgender is contesting in local body poll, thus becoming the first transgender to contest in Town Panchayat election of Devarahipparagi Taluk.

Having filed nomination papers on the BJP ticket, Malkappa said that she wanted to contest in election in order to serve people and do good for other transgender.

“When I initially thought about contesting in the election, some people suggested that I should not contest as people would not vote for me but I was determined. After this, I received support from others including people from transgender community. They encouraged me to contest polls,” she said.

Malkappa said that she is contesting to help people being in politics. “I win or lose, that does not matter. I am not so keen about it. My objective is to contest elections and show my ability. If I win, it will be a great thing but even if I lose, it will not affect me,” she said.

Having started the campaign from Tuesday itself as the election is scheduled on December 27, she said that she has been getting good response from the people during the campaign.

“Wherever I go to seek votes, people show respect towards and also extend their support. This is giving me confidence of victory in the polls,” she said.

Asked why she chose BJP to contest polls, she said that she has been a supporter of the party since long, and thus she approached some BJP leaders for the ticket. ” When I approached the local BJP leaders, they came forward to support me and helped me get a ticket,” she said.

Living with her family in Devarahipparagi town, Malkappa earns a living by seeking alms and participating in religious rituals where the people pay money. “This is the way I am earning. I have no desire to make money by joining politics. The only objective is to serve people in my capacity,” she said.

Answering a question, she said that during the campaign, local BJP leaders and around 20 other transgenders have also been joining her.