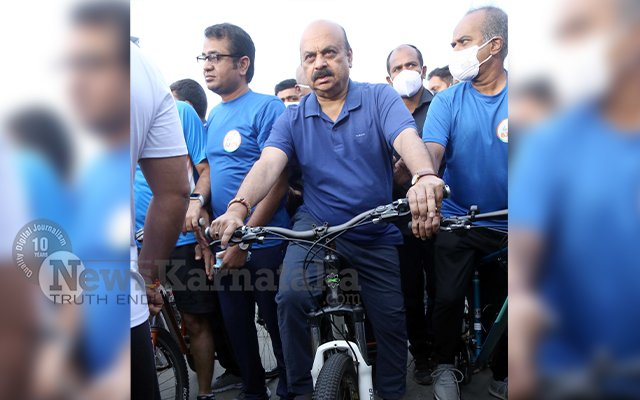 Bengaluru: Karnataka Chief Minister Basavaraj Bommai on Sunday said the Bharatiya Janata Party-led state government will build the “best cycling tracks in all four directions of the city” to encourage the cycling enthusiasts.

“Our young cycling enthusiasts had submitted a memorandum to the state government to build a cycling track in the upcoming Shivaram Karanth Layout… but I feel that such cycling tracks are the need of the hour in all four directions of the city,” he said after flagging off the “Cheer India” cyclothon in support of the Indian Olympic sports stars here.

Heaping praise on Prime Minister Narendra Modi, the Karnataka Chief Minister said Modi has emerged as people’s Prime Minister with his innovative programmes that are aimed at attracting the youngsters.

“His innovative national programmes like “Swacch Bharat” (Clean India) and “Khelo India” (Play India) have already caught the imagination of youngsters. Because of such innovative schemes, he has become the ultimate leader of the young masses. My aim is to replicate his vision in Karnataka from – “Khelo India” to “Jeeto India” (Win India) here,” Bommai added.