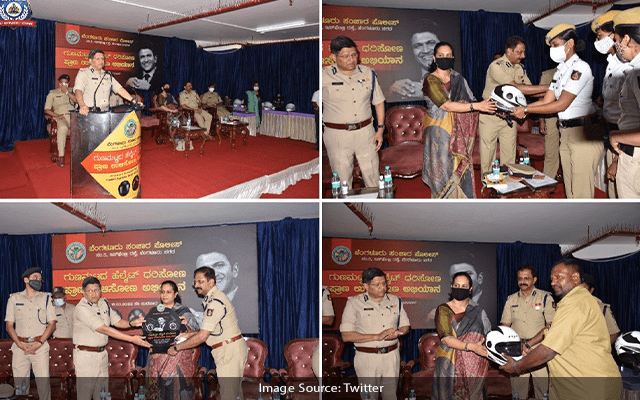 Bengaluru: The Bengaluru traffic police on Wednesday March 16 launched a campaign in honour of Puneeth Rajkumar to promote awareness about the importance of wearing good-quality helmets in saving lives during accidents.

The campaign was launched with the release of a video message from the late actor, urging people to follow traffic rules and wear helmets while riding bikes. Ashwini Puneeth Rajkumar, the wife of Puneeth Rajkumar, distributed helmets to women traffic personnel at the Traffic Management Centre.

It was described as an important campaign by both Bengaluru Police Commissioner Kamal Pant and Joint Commissioner of Police (Traffic) B. R. Ravikanthe Gowda. They believed that the video message would encourage young people to obey traffic laws.

The campaign is part of the traffic police’s ongoing efforts to encourage people to wear ISI helmets with secure chin straps.