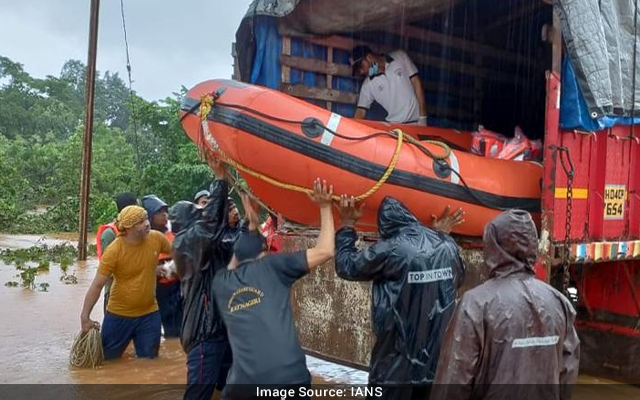 Bengaluru: The Indian Coast Guard has saved 215 lives in rescue and relief operations in water-logged areas of Maharashtra, Goa, and Karnataka, an official statement said on Sunday.

The Indian Coast Guard, at the request of civil authorities, dispatched Disaster Relief Teams (DRTs) with inflatable Gemini boats and life-saving gear to the affected areas, the National Disaster Response Force said in a statement.

The DRTs reached areas rendered unapproachable due to water inundation, especially in Chiplun and Mahad areas of Maharashtra and Umlijoog, Khargejoog, Bodjug Island and Kinnar village in Uttar Kannada district of Karnataka, “and with dedicated efforts evacuated the stranded persons to safety and provided required relief material”, it said.

In Goa, Coast Guard aircraft have undertaken aerial assessment of Ganjem Dam, Usgaon and Codli areas, and its helicopter had air-dropped approx 100 kg of relief materials, including food packets and drinking water, for the stranded people.

“The ICG efforts have translated into saving 215 precious lives under the current rescue operation till to date across these three states,” the statement said.

The services of Coast Guard air station at Ratnagiri are also being extended to Indian Navy and Indian Air Force aircraft for airlifting of NDRF teams, relief material and facilitating rescue operations across the affected regions.

“In addition to the already deployed teams, the Coast Guard DRTs as well as ships and aircraft are standby at high readiness for immediate mobilisation for exigencies, if any and a close coordination with local administration is being maintained,” the statement said.