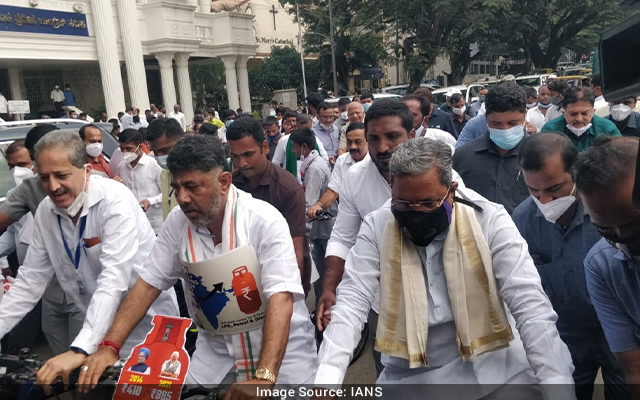 Bengaluru: Karnataka Congress leaders after staging a bullock cart procession against the price hike a week ago, bicycled to Vidhana Soudha on Monday September 20 to attend the legislative session. The Congress demanded a minimum of 20 per cent reduction in prices of daily commodities and fuel.

Siddaramaiah while speaking to the media said that they are trying to get the attention of the ruling Central and state governments on the issue of price rise by organising bullock cart and bicycle rallies.

“The Central government is not responding. The LPG gas cylinder cost Rs 590 in 2020. Now it has reached Rs 922. The subsidy to LPG has also been stopped. The Central government blames the Congress party that it had taken loans of Rs 1.40 lakh crore. Yes, it is true. But, what happened to Rs 23 lakh crore tax collections last year. Why are prices not coming down,” he asked.

Shivakumar said, “The ruling BJP has not increased salaries and pensions, though international oil market prices are low, the price of petrol, diesel and LPG have been hiked. People are forced to sell their precious belongings to live.”

“The BJP did not give money to the Covid victims and did not even sympathise with families. I urge the people not to tolerate this. We are up against this government and you should overthrow this BJP government,” he said.

“The BJP has mocked us for bullock cart and bicycle rallies. They suggested we come to the session by walking, we will also do that,” he said.

The issue of price rise is likely to heat up in the Assembly as both Siddaramaiah and D.K. Shivakumar vowed to raise it when the government gives answers on the submissions made by them in the Assembly.