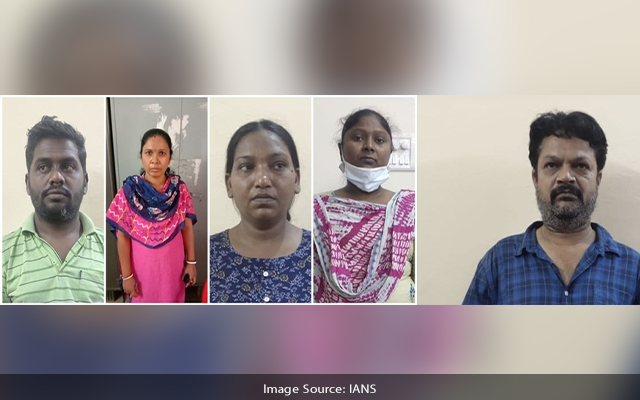 Bengaluru: The Karnataka Police have busted a fake surrogacy racket selling children to childless people, by claiming that they are born of surrogate mothers in Bengaluru on Wednesday October 6.

The accused were identified as Devi Shanmuga, Mahesh Kumar, Rajana Deviprasad, Janardhan aka Janarthan and Dhanalakshmi. The kingpin of the racket Ratna died after contracting coronavirus.

The police have traced 11 kids and it is suspected that the accused have sold 18 more children. They allegedly charged Rs. 2 to Rs. 3 lakh per child and got the money in instalments from the people who were given the child.

DCP (South) Harish Pande explained that the police got a breakthrough in busting the racket after they found out 28 mothers’ cards were issued to pregnant and lactating mothers from the house of one of the accused persons. “At that point, we did not know that the mother’s card was fake or belonged to original mothers. The police department tracked 11 kids one by one. Mother’s card was manipulated to show parents who bought the children as biological parents,” he stated.

A nurse and compounder of a private nursing home were involved in this racket and they issued the mothers’ cards with fake signatures. The accused sold the kids in various districts in Karnataka. The police are also booking the fathers who sold their kids to the accused persons. However, the people who bought the kids are not being booked, the official said.

“We have arrested the middlemen and woman. The department needs to trace and identify a few more children. Some of the people who are presently bringing up the children are willing to adopt them. However, the Child Welfare Committee has to give official orders,” he said.

The surveillance cameras have shown the movements of the accused in various hospitals in Bengaluru. They would visit hospitals and make offers of money to gullible and poor parents to sell their newborn babies. They also collected information about parents who are getting treatment at fertility centres. They had access to the contact numbers and approached them with the offer of surrogacy, he said.