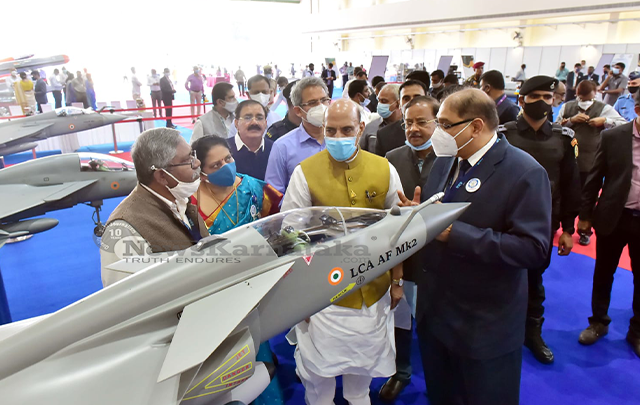 Bengaluru: Defence Minister Rajnath Singh on Friday October 22 said that what Lord Rama did in Lanka, and Lord Krishna did in Mathura, the Indian armed forces did the same in Bangladesh in 1971.

He was speaking at the inaugural session of three-day conclave under Swarnim Vijay Varsh celebrations at Yelahanka Air Base here organised to celebrate the comprehensive victory of Indian armed forces that led to the birth of Bangladesh.

“1971 war was not fought for taking land, or gaining control of skies… the main objective of the war was humanity and upholding the highest traditions of democracy. The neighbouring country which imposes martial law and emergency rule, instead of handing over power to Banga Bandhu’s party leaders had put them in jail. To put an end to human suffering and genocide caused by neighbouring country was the ‘Raja Dharma’ (duty of a ruler) and ‘Rashtra Dharma’ (duty of a nation) of our country,” he said.

He said that whenever there is a necessity, India has stood with justice and humanity. “The 1971 war was fought on this basis. Even today, the country is treading the same path and in future also it will continue to be on the same path,” he noted.

About the 1971 war, Rajnath Singh said India had to manage on many fronts, and the victory would not have been possible without politico-military synergy. “On one hand we had to support the Mukti Bahini movement, on the other hand we had to deal with lakhs of refugees on the East Pakistan border. Fourth was to ensure China does not meddle on the northern front and India was also obliged to retain its credibility with the international community,” he said.

He praised that the Indian government’s decision to forge friendship ties with the then Soviet Union proved crucial as the world’s other powers declined to support India.

“When the 14 day war was waged from December 3, 1971, India was fully prepared politically, diplomatically, and militarily. The 14 day war had decimated Pakistan’s army and became a glorious chapter in the history of Indian armed forces. The world witnessed the largest military surrender – of 93,000 soldiers – after the Second World War,” he added.

It was a triumph of ‘dharma’, he said.

“When I say Dharma it won’t mean a particular religion. The total Bangladesh war was managed by General Sam Manekshaw, a Parsi by religion; Indian Air Force chief was P. C. Lal, a Hindu; Northern sector Air Marshal Latif was a Muslim; Eastern front was led by Jagjit Singh Aurora a Sikh; Major General J. F. R. Jacob who marched to Dhaka to negotiate surrender with Pakistan was a Jew.

“It did not make any difference, all fought for humanity,” he maintained.

The scholars say that it was a classic example of a just war. Instead of military victory, India without taking any political control handed over the reins of the country to the local leaders, he said.