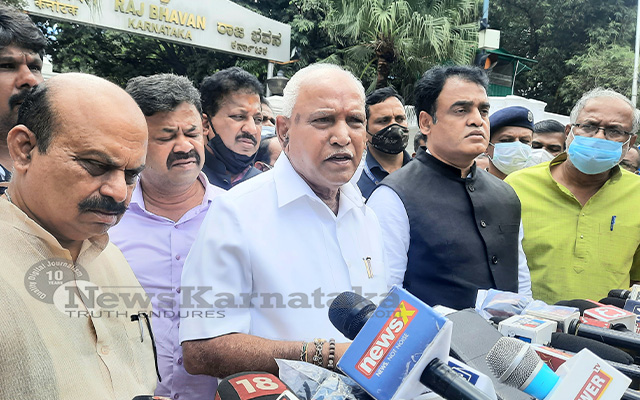 Bengaluru: Outgoing Karnataka Chief Minister B. S. Yediyurappa, who tendered his resignation to Governor Thaawarchand Gehlot on Monday July 26, stated that he won’t suggest any name to the party as his successor, but party sources say that he is never going to be a mute spectator to the process.

“He will not take any development sidelining him very lightly, as he knows his strength of being an unparalleled mass leader in the state. The BJP, knowing very well his strength, wanted him to announce the name of the new Chief Minister to gain momentum,” a source said.

According to sources, Yediyurappa is rooting for Home Minister Basavaraj Bommai or Deputy Chief Minister Govind Karjol, as Bommai, though being a strong leader, is his staunch supporter and Karjol will never cross his line and the calculation is being Yediyurappa could continue as a ‘super Chief Minister’ in the state.

However, BJP’s General Secretary, Organisation, B.L. Santhosh, who can wield influence at the party parliamentary board, is expected to put brakes on Yediyurappa having his candidate to succeed him.

The party is seriously considering the candidature of Santhosh himself, Union Parliamentary Affairs Minister Prahlad Joshi and Speaker Vshveshwara Hegde Kageri for the post. However, the high command is not able to take a call on this as all hail from the Brahmin community and the party doesn’t want to antagonise the Lingayats.

Hence, the party is also considering names of MLA Aravind Bellad, Basavanagouda Patil Yatnal, and Bommai for the post if they decide to install a Lingayat Chief Minister. National General Secretary C.T. Ravi and Deputy Chief Minister Ashwath Narayan’s names are also being discussed, as both are loyal party leaders and Hindutva proponents. They belong to the Vokkaliga community.

Sources says that Yediyurappa’s choice of successor will give a tough time to the high command. When he stepped down as Chief Minister in 2012, the party, under the guidance of veteran leader L.K. Advani, wanted to name Jagadish Shettar to the post.

However, a wounded Yediyuarappa not only challenged the senior leader and forced the party high command to conduct internal elections in a five-star hotel in Bengaluru, he managed to ensure the win of D.V. Sadananda Gowda.

A year later, Yediyurappa changed his mind and this time installed Shettar as the CM, much to the chagrin of the party seniors.

The party central leadership had to suffer severe embarrassment at the national level after these developments.

Speculations are rife on whether Yediyurappa now will be able to face the Prime Minister Narendra Modi and Home Minister Amith Shah to pursue his agenda. So far, Yediyurappa has toed their line and has never given any damaging statement on the party.

Back in 2012, Yediyurappa enjoyed the support of more than 50 BJP MLAs. The scenario has changed now. It is to be seen whether Yediyurappa takes diktats of the party or he will be able to challenge the current central leadership.