Mangaluru: A two-day birth centenary programme honouring late Indian freedom fighter B V Kakkilaya was held at the Bishop Jathanna Auditorium in Balmatta, Mangaluru on Saturday, August 10. Kakkilaya played a crucial role in the Karnataka reunification movement and went on to serve as a member of the Rajya Sabha and Karnataka Legislative Assembly.

All India Students Federation (AISF) leader and Communist Party of India (CPI) politician Dr Kanhaiya Kumar was the chief guest of the event.

Inaugurating the event, All India Trade Union Congress (AITUC) General Secretary Amarjeet Kaur spoke on the role of the working-class movement in India’s freedom struggle. “I am also the daughter of a freedom fighter. The AITUC is the first organisation to adopt the resolution of complete independence for India,” she said.

Speaking about the present situation in the country, Kaur said, “The present scenario is such that public sector jobs are being outsourced while the government continues to bulldoze bills through the Parliament. We had demanded Rs 18,000 to be the minimum wage but they made it only Rs 4,500.”

Paying homage to the freedom fighter, Kanhaiya Kumar said, “The British used to call people like Kakkilaya ‘anti-national’ at that time. After 75 years, the only change is that the Delhi Police is labelling people this way.”

Speaking on the topic ‘Indian youth at crossroads’, Kumar said that the present cultural hegemony was due to the social conditioning of the youth. “They (parents) teach us to become engineers or doctors based on whatever is in demand in the market. If a son cannot question his father, then how will he question the government? Today’s youth have fallen victim to digital propaganda and misinformation. We have to train people democratically and ensure that it exists within our society,” he added.

Kumar further opposed the misogynistic comments made by BJP leaders on Kashmiri women. He said, “The BJP knows that revoking Article 370 will make no difference to the development of Kashmir. But, they are doing it to widen the divide between Hindus and Muslims. BJP’s hypocrisy has surfaced. I want to thank them, for if it wasn’t for them, none of us would know the true value of secularism and the Indian Constitution.”

The event was compered by Kakkilaya’s son, Dr B Srinivas Kakkilaya.

Meanwhile, members of the Akhila Bharathiya Vidhyarthi Parishad (ABVP) and Sri Ram Sena held a protest outside the venue. As many as 39 persons were taken into preventive custody by the police who were present to maintain law and order. 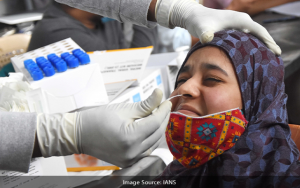