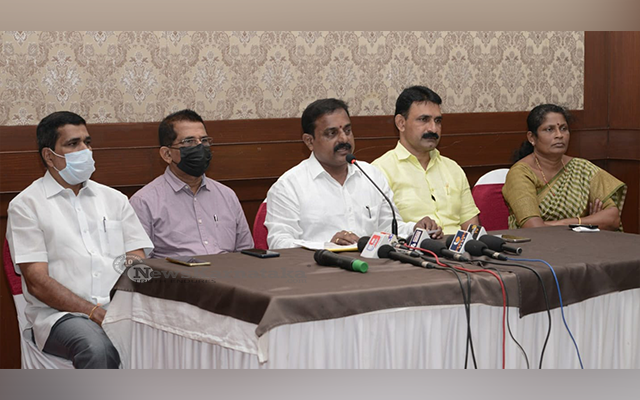 Mangaluru: The State BJP Chief Nalin Kumar Kateel has been called weak on social media. In response to this, Dakshina Kannada District BJP unit President Sudarshan M. said that if someone asks for his resignation on social media, he will not resign from his post since the position is not alms given to him by such people, but rather a responsibility entrusted to him by senior party members.

“There is no doubt that he has carried out the responsibility that has been entrusted to him. J. P. Nadda, the National BJP Chief, has praised his organisational skills as well. Everyone can see how the BJP has grown into a successful organisation in the State under him by looking at the results. The BJP has faced many elections in the State and has won the majority of them under his leadership,” said Sudarshan.

He further alleged that these social media posts are the handiwork of some disgruntled people. “This is an evil plan hatched to bring a divide between BJP and Hindu organisations in Dakshina Kannada District, and thus try to loosen BJP’s grip on its bastion. Many who had been critical of Kateel in the previous term have now written positively about him, while others have approached him seeking certain responsibilities or posts to be entrusted to them. When no responsibilities or positions are assigned to them, however, some people write bad things about Kateel,” he added.

“There are also those that aspire to be social media stars in the hopes of becoming future MLAs or Ministers. This behaviour is the height of foolishness, stressing that no Hindu organisation can be created using social media. Hindu organisations have existed even before we were born, and that the sacrifice of our ancestors is the primary reason for their continued existence. “True party workers will not resort to such malice on social media, he continued, and said, I urge all true party workers not to fall for such rumours and gimmicks. Whether the BJP is in power or not, the party will always support Hindu organisations. There is no uncertainty in this matter,” he emphasised.

The question such as State BJP Chief has a background of Hindu organisation, and what is he doing currently in BJP are being raised. “As I have reached to be BJP District President from being Bajrang Dal District Convenor, I very well understand what are the responsibilities of a Bajrang Dal leader, who is a true leader, and how a party worker executes his job. I also know how to help the party workers,” he said.

He further claimed that whatever help the party provides to their party workers is not done for any publicity but a primary duty. “I have been a witness on how our State Chief has been helping such party workers on a daily basis,” he added.

Sudarshan remarked that a thorough investigation into the atrocities done by PFI protestors against police is needed and that the culprits must be punished according to the law. He urged the police to be on the watch for the PFI’s SP Chalo, which is set to take place in the City. He added that since the BJP came to power, no adverse incidents have occurred in the District, and the party has solely worked to maintain communal harmony and peace.