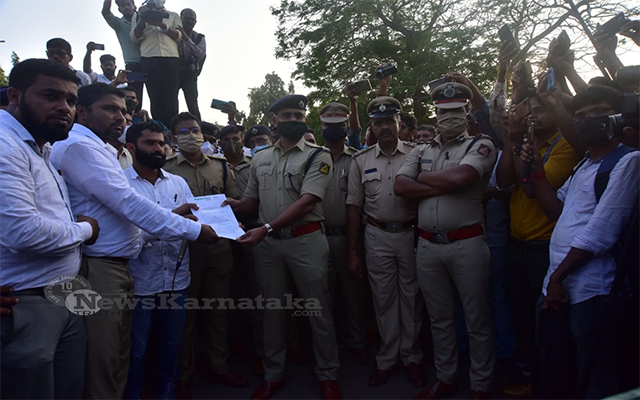 Mangaluru: Popular Front of India activists on Friday December 17 held a protest SP Kacheri Chalo in the City condemning the alleged police atrocities against its activists in Uppinangady Taluk of Dakshina Kannada District.

The protestors alleged that the police resorted to lathi- charge during a peaceful protest outside Uppinangady Police Station on Tuesday December 14. They also demanded the release of innocent activists in police custody.

Protestors in large numbers took out a rally wielding PFI flags and placards raising slogans against alleged police violence, and demanded police misusing power be punished. Tight police security too was in place. The protestors were stopped at Clock Tower, and were not allowed to move further towards the Police Superintendent’s Office.

Earlier, addressing the protestors, SDPI leader Shafi Bellare said why police are paid salary if public have to bring the culprits to police station.