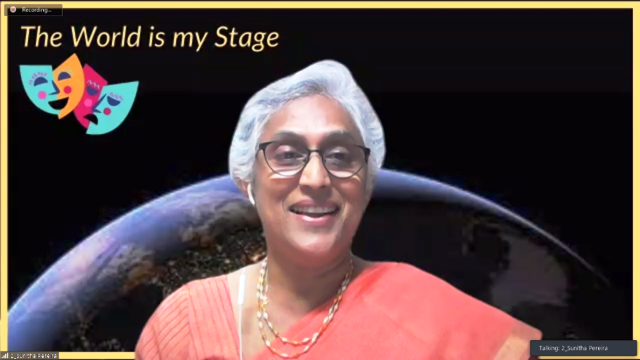 TM Sunitha Pereira took charge as President of Mangalore Toastmasters Club for the TM year July 2021 – June 2022 on July 4, 2021 at a glittering online ceremony themed “The world is my stage”.

The program began with the invocation by TM Lalitha Pandey. after which TM Fiona Pinto welcomed the guests.

‘Life teaches us many important lessons. It’s only self-actualization that keeps life going. Perseverance and diligence give the expected result.’ This was the message by Mrs. Suman Nayak, the Bharatanatyam dancer, and teacher from San Diego, California, at the installation ceremony of Mangalore Toastmasters Club. She was speaking from the chief guest’s chair as TM Shraddha Pai, the Past President passed the baton of Presidentship to TM Sunitha Periera on 04 July 2021. Mrs. Nayak’s rendering of a poem through dance and the nuances of recitation gave us a glimpse into her adaptability and capability in using gestures to give multiple meanings to the words.

Division F Director TM Bina Shetty, who was introduced by TM Praveen Badiger inducted eight new members into the club. TM Divyashree Gatti introduced each of the new members and welcomed them to the club. The prestigious ‘Toastmaster of the Year 2020-21’ award was bagged by TM Sapna Shenoy, a versatile Investment Services Professional, who had showcased her proficiency as an Area Director by starting two new clubs in Area F3. All the members took a delightful walk down memory lane while watching a presentation of all the celebrations and achievements of the club presented by TM Chandrashekar Palekar.

TM Shraddha Pai, the outgoing President, thanked her team for their unstinted support in attaining maximum awards and creating an impact on the world outside the club despite the pandemic by organizing two Youth Leadership Programs and a Speech Craft Program for the jail inmates of Mangalore Central Jail. TM Sunitha Pereira, the incoming President, pledged to strengthen the members in their communication as well as leadership skills.

The 7 top officers of Toastmasters International District 121: District Director, DTM Vanitha Rangarajan; Programme Quality Director, DTM M Naraya; Club Growth Director, DTM Arjun Sunder Raj; District Finance Manager, DTM MN Pai, District Public Relations Manager, DTM Rohan Ravindran; District Administration Manager, DTM Gokul Menon; and District Logistics Manager, DTM Megana Kamath; praised the accolades received by the past board and wished well for the incoming board. The presidents of twenty-two different clubs of Divisions F and L, the club sponsors and the charter members felicitated the new board promising that care to help them to dare into this new role so that they rise and shine to illuminate the lives of others.

TM Frances Pinto thanked each one present at the program. The program was compered by TM Avin Roche.