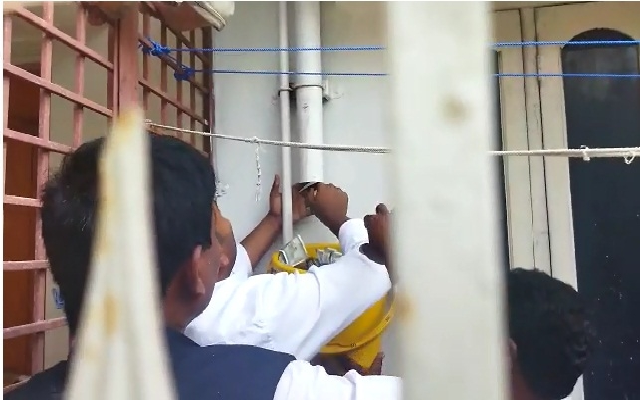 Kalaburagi: The Anti-Corruption Bureau (ACB) officials conducting simultaneous raids on 68 locations across the state on Wednesday November 24 recovered more than Rs. 50 lakh cash bundles stashed in a drainage pipe and ceiling of a house.

Officers raiding the residence of Junior Engineer Shanta Gouda Biradar in Kalaburagi discovered the bundles of currency notes worth Rs 13.50 lakh inside the house drainage pipes attached to the bathroom. They also recovered Rs 15 lakh in cash from the ceiling of the house. In all, they seized more than Rs 55 lakh from his residence.

High drama was witnessed when Shanta Gouda did not answer the door for 15 minutes even as the team was continuously knocking on the door. They learnt that Shanta Gouda, along with his son, was busy stashing cash into the wash basin outlet.

After gaining entry, they had to cut open the pipe and confiscated Rs 13.50 lakh in cash.

Sources explained that Shanta Gouda had inherited two acres of land from his father and now owns more than 35 acres near Kalaburagi.

The raids are still being conducted in various locations of Bengaluru, Kalaburagi, Davanagere, Belagavi, Mangaluru districts since early Wednesday morning.