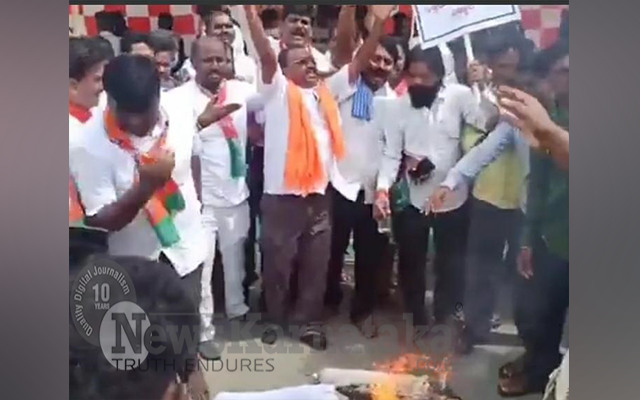 Raichur: In a fit of rage former MLA A. Papareddy has slapped a police constable here on Wednesday November 3, it is reported. Former MLA lost his cool as he was stopped from burning the effigy of Opposition Leader Siddaramaiah while on a protest.

The incident attracted the interest of the netizens when a video clip of the BJP leader arguing with the constable from Raichur West Police Station went viral. The protest was being held By BJP Scheduled Castes’ Morcha against Siddaramaiah who passed remarks in a recently held bypoll campaign that Dalit leaders stopped supporting Congress and joined BJP to secure their livelihood.

Speaking to mediapersons, Papareddy however claimed that he assumed that the policeman was a BJP activist as he was unaware that the man was from Police Department because he was in plainclothes. Further, he also questioned why other party leaders who earlier burned effigy of Prime Minister Narendra Modi many a times were not stopped by police. He also refused to apologise to the constable instead demanded action against him for disturbing the protest and protesters.

Sources from Police Department stated that a case would be registered in this regard.