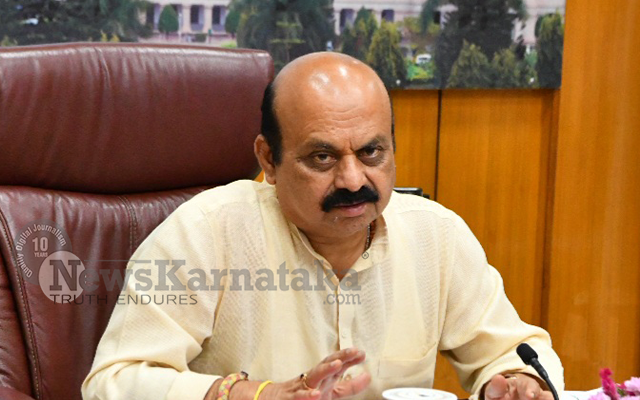 Bengaluru: Karnataka Chief Minister Basavaraj Bommai is facing the challenge of ‘Lingayat Panchamasali’ agitation for reservation which is scheduled to go on for one long month.

The challenge has become a litmus test for him as the ‘Most Backward Castes Awareness Forum’ has submitted a memorandum urging him not to bring Panchamasali Lingayats in the list of the ‘Other backward Classes’ (OBC).

Adding to the woes, Panchamasali seer Jayamrutynjaya swamiji has vented out his ire on former Chief Minister B.S. Yediyurappa’s son B.Y. Vijayendra alleging that he had tried to misguide the whole movement.

The agitation demanding reservation started on Thursday (August 26) from Male Mahadeshwara hills in Chamarajanagar district. The one-month long agitation is named as Pratigna Panchayat. The organisers have planned to create awareness at every taluk level under the leadership of Jaya Mruthyunjaya swamiji.

The government headed by former Chief Minister B.S. Yediyurappa had promised to sanction reservation for the Panchamasali sub sect on the floor of the House. At the time, a 600 kilometer padayatra was undertaken from KudalaSangama to Bengaluru demanding reservation.

Jaya Mruthyunjaya swamiji has stated that Yediyurappa was misguided by his son Vijayendra on the movement. The community, which comprises the lion’s share of population among the Lingayat community supported Yediyurappa. Now, they are looking forward to a leader who can support them, he added.

Presently, Lingayats who fall into lower income groups can claim reservation under 3 B reservation quotas along with Jains, Christians and others. Some sub castes can claim under 3A category. However, if reservation is provided under 2 A category, which has 15 per cent reservation for Other Backward Classes (OBC), it would boost the prospect of getting government job opportunities for Panchamasalis.

Yediyurappa during his tenure had directed the Commission for Backward Classes to submit a report in this regard. The report, however, has not been submitted yet. Since, the Panchamasali community has begun the agitation, the ruling BJP especially Chief Minister Bommai is facing a daunting task of managing the situation..

Minister for Industries Murugesh Nirani, senior BJP leaders Aravind Bellad and Basanagouda Patil Yatnal, belong to the Panchamasali sub caste, and all were aspirants for the Chief Minister’s post but failed to make it.

Jaya Mruthyunjaya Swamiji has made an announcement that the deadline given to the government (September 15) to provide reservation is nearing and Chief Minister Bommai should initiate steps to provide reservation. “We will back that individual or party who extends support to us,” he underlined.

The Bommai government which has to face Zilla Panchayat, taluk panchayat elections very soon is facing a real challenge in dealing with the situation.