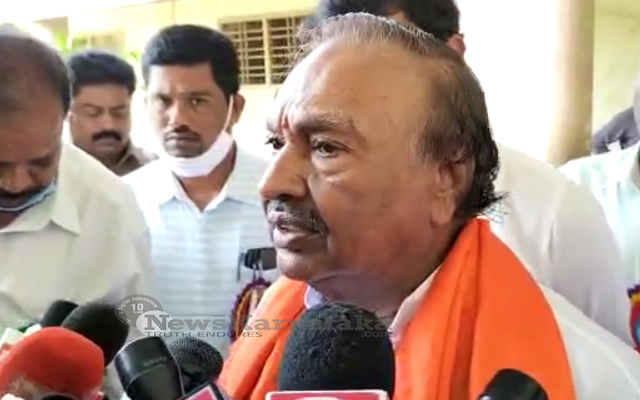 Speaking to media persons here on Wednesday October 21 he said that it was a very unparliamentary comment to make on Prime Minister Narendra Modi that he is an illiterate by the Congress while entire world looks up to him as an influential leader. Why should not we retaliate? He questioned. Congress leaders Siddaramaiah and D. K. Shivakumar, who make such imbecile statements need to be admitted to mental asylum, he added.

Stating that when BJP leaders were spoken badly about, these Congress leaders remained mum, Eshwarappa said that when BJP spoke about their leader Rahul Gandhi is when they started speaking and opposing the same. We are proud to say that we never spoke of any national level leaders in a derogatory manner, he asserted and supported the State BJP President Nalin Kumar Kateel’s remarks. He also asked Siddaramaiah to render an apology for insulting country’s Prime Minister.

Responding about JD (S) as a party, the Minister said that JD (S) is a party with no influence and is helpless. However, the party leaders do not know to keep quiet, and now JD (S) Leader H. D. Kumaraswamy has spoken ill about RSS. While RSS is a world organisation, and represents our culture, Siddu and Kumaraswamy cannot dent its image, he affirmed. Let Former Prime Minister save JD (S) as regional party while Congress will be reduced to a regional party soon, he observed. He also questioned why Congress leader Ugrappa has not been removed for comment against DKS while Saleem has been punished with suspension. Is it because he is Siddu’s follower? he queried.