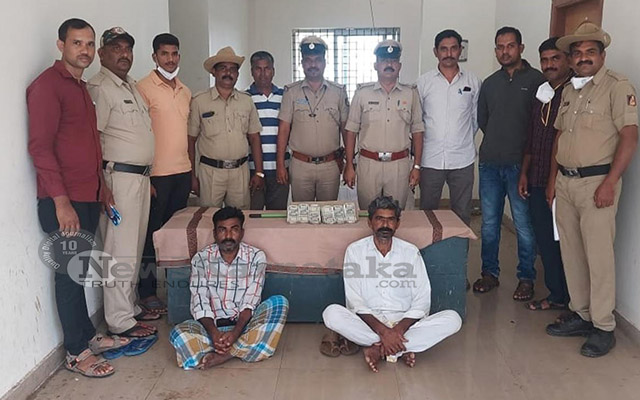 It is said that the prime accused Raju, a native of Kollegala and his two accomplices Sannappa Gowda and Tangavelu, natives of Yerambadi village sold fake snake-stone to Mounesh, a native of Bengaluru a month ago.

The accused gave fake snake-stone in a wooden box fixed with charger light to dazzle the crystal. The accused initially demanded Rs 1 crore, but the deal settled for Rs 30 lakh and the amount was collected. After sometime Mounesh    discovered that snake-stone was fake and soon filed a complaint with Ramapura police station in Hanur taluk on Monday July 26.

Police swung into action and managed to arrest Sannappa Gowda and Tangavelu. The prime accused is absconding. The accused Sannappa Gowda and Raju in the year 2007 sold fake snake-stone to one Gangadhar in Bengaluru, collected lakhs of rupees. Later Gangadhar filed a complaint with Kollegal rural police. In this case both the culprits were convicted and imprisoned for 10 years. Inspector Nanjunda Swamy said that after being releases from the prison, they again took up the same illegal work. He said police are probing if the accused have cheated a greater number of people.