Mysuru: The Dasara elephants were sent to Mysuru after the pooja at Veerahosalli on Monday September 13.

Normally a team of 14-15 elephants take part in State festival Dasara but since last year the State Government has downsized the celebration of festival by organising simple Dasara.

The major attraction of the 9-day Dasara celebration is the elephants. Thousands of children wait eagerly to see the elephants at the palace premises. Last year State Government used only five elephants. This year the government has decided to use 8 elephants of which 5 are male and three females.

Abhimanyu will lead the elephant brigade. The other elephants are Gopalaswamy, Vikrama, Kaveri, Dhananjaya, Ashwathama, Chaitra and Lakshmi. The elephants would reach Mysuru Aranya Bhavana, stay there for three days and then would enter palace premises on September 16 morning. 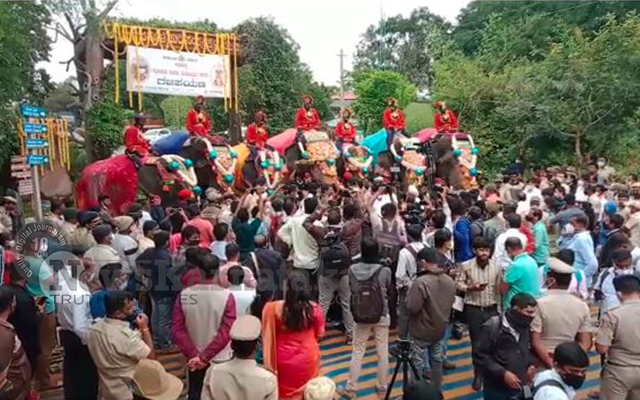