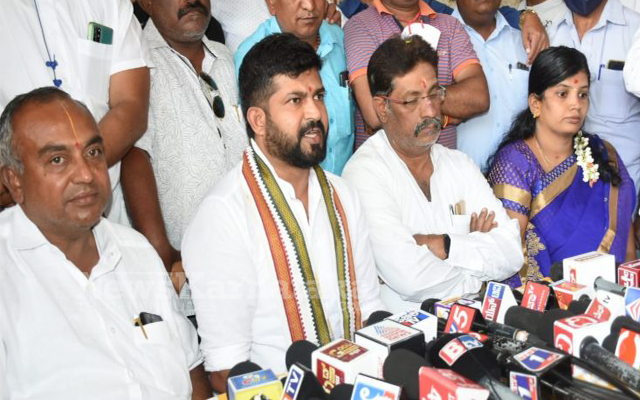 Mysuru: Close on the heels of the State Government passing a bill on temples in Karnataka, the Bharatiya
Janata Party’s Mysuru-Kodagu Member of Parliament Pratap Simha visited Ganapathy Temple at Agrahara Circle here and offered special puja on Friday September 24.

Speaking to media persons, he said, “Lord Ganesha has fulfilled our request for temples. We have a good Chief Minister in Basavaraj Bommai. He has passed a Bill within 10 days of our request. Uchha Ganapathy Temple will be reconstructed though at a different place, he said.

Informing that CM Bommai and BJP State President Nalin Kumar Kateel will attend its foundation-laying ceremony, he said “We are hoping the State Government to fund the construction of the temple.”

Reacting to religious conversion in the State, Simha said, “MLA Goolihatti Shekar has expressed concern over this. I have raised this issue time and again. Why are people against a Bill on anti-conversion? There is no need to worry if there is no such conspiracy.”

Simha expressed, “Hinduism believes in secularism. But other religions believe in sheer numbers. Conversions are taking place in Hunsur Taluk. The people concerned should intervene to stop this.” He said the government would
take stringent action against those who indulge in converting people through dubious means.

He added, “There are reports that people of a particular religion go to some areas and offer freebies to brainwash people. Goolihatti Shekar’s mother is caught in such a conversion wrangle. It is not right to resort to conversion.”