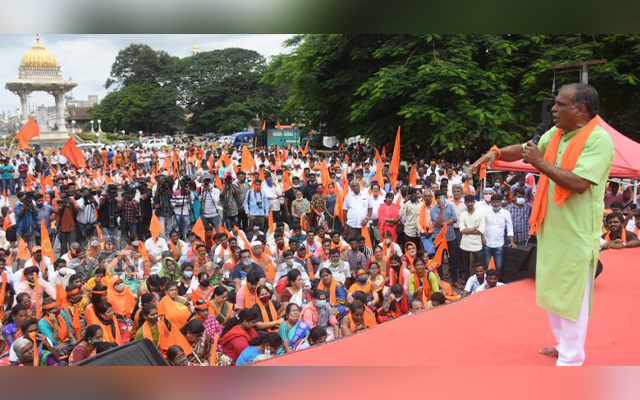 Mysuru: Hindu Jagarana Vedike (HJV) has come down heavily on the bureaucrats especially the Chief Secretary to the State Hovernment, Deputy Commissioner of Mysuru and Nanjanagudu Tahsildar for the demolition of Adishakthi Mahadevamma Temple at Uchagani Village in Nanjanagudu Taluk.

Addressing the gathering, HJV southern wing General Secretary Jagadish Karanth alleged that,“the ignorant Chief Secretary of the State Government is in service for the last 30 years. Are they ignorant of reading even the Supreme Court order? he questioned. “Temple clearance should be the last option, If the temples are legal and have been built before the date specified by Supreme Court, such temples should be regularised. Otherwise it must be relocated. If no options are available, demolition should be the last option. This is the procedure to be followed, he said.

‘If the country does injustice in the name of the Supreme Court order, we are not the one who will tolerate it as we are in a democratic system. This should be the first and last incident. Otherwise we will spread the movement against officials across the State,” warned Karanth.

Uchagani Temple had huge religious sentiments and history yet authorities dismantled the temple without any prior information or notice, he claimed.

Mohammed Safdar Kaiser, Editor-in-chief of a daily, who was recording the speech of Jagadish Karanth when a group of activists took objection for video recording the event.

They demanded Kaiser to delete the recording and manhandled him. Police rushed, and succeeded in keeping Kaiser in a room attached to the palace compound to ensure his safety and cleared the mob. Kaiser has lodged a complaint at Devaraja Police Station. Mysore District Journalist Association (MDJA) President S. T. Ravikumar has written to the Police Commissioner demanding action against assailants and to provide security for journalists during such religious events. The Association has also condemned the incident of assault on suspicion by Vedike activists.