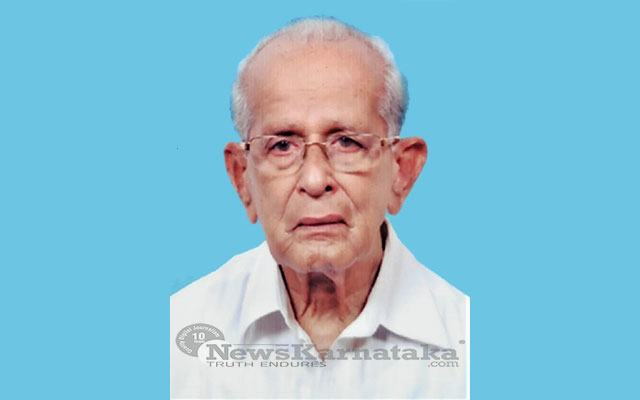 Mangaluru: K. I. George (97), retired town planning officer of erstwhile Mangalore Municipality passed away at a private hospital in the city on Saturday, October 16, 2021. He is survived by two daughters Marylin and Nyna, their spouses and grandchildren. He lost his wife Thangamma George two years back and his eldest daughter Olive some years back.
He had served the Mangalore Municipality for more than forty years before retiring as the Town Planning Officer. Blasius D’Souza was the Municipal Chairman during his tenure. He has the credit of planning the entire city layout, roads and amenities. He was considered to be very honest officer who would strictly abide by the rule book. He had planned most of the housing layouts in the city, yet he never had a housing plot for himself. Throughout his life in
Mangalore he lived in rented houses.
K. I. George was born on 17 th November 1924 and hails from Kunnamkulam, Thrissur district in Kerala state. After doing engineering, he applied for a job through the national selection process and was selected to work in Municipal Administration in Karnataka. He was posted in Mangalore Municipality in 1960. During his term between 1970 and 1980, Mangalore experienced significant growth with the opening of New Mangalore Port in 1974 and
commissioning of Mangalore Chemicals and Fertilizers Limited in 1976. As a result, K. I. George also planned the industrial areas within the city limits. His foresighted planning stood ground when the city began to develop as a commercial and petrochemical hub in the late 20th and early 21st centuries.
Funeral service to be held at St. Paul’s CSI Church, Mangalore on Monday, 18th October 2021
at 3 pm. Relative and friends may contact 9845446418 / 9986613718.