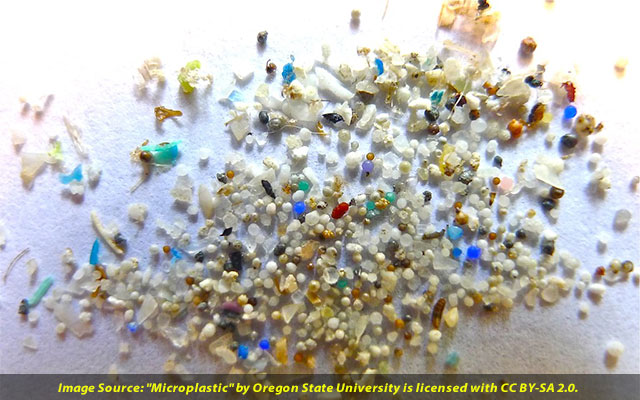 One of the environmental legacies of Covid-19 may well be vast amounts of plastic pollution. Since the beginning of the pandemic, scientists have warned of the long-term threat of littering face masks and other PPE into the environment.

These large plastic items break down into microplastics, which wash into our waterways and agricultural land. Microplastics are commonly defined as solid plastic particles or synthetic fibres of the size between 1 and 5000µm, or micrometres.

The problem is of course much bigger than face masks: industrial and private activities release microplastic into the environment in different ways, where they negatively impact ecosystems. Microplastics are found in many ecosystems and even ingested by many species.

Microplastic pollution is best known as a pollutant in oceans, lakes and rivers. But microplastics also have an impact on land: they can break down the structure of soil and harm the creatures that live there, for example when it is ingested by earth worms.

The two environmental problems are related – microplastics in soils can also be transported from agricultural fields into rivers, lakes and the ocean by erosion and surface runoff.

In both water and soil, microplastics can have an extremely long life. In soil, plastic particles can last up to a hundred years or more, depending on the characteristics of the plastic particles and the environmental conditions in the soil.

There’s a lot we still don’t know about how microplastic pollution gets into the environment, and how much is there.

One challenge is determining the content of microplastics in soil. The difficulty lies in the fact that the chemical and physical characteristics of microplastic particles are similar to organic matter, which makes the separation of plastics from soil very difficult.

This means it’s very expensive to analyse individual soil samples, and the prohibitive cost limits the number of samples which can be examined at a time. The low number of available samples are normally not enough to derive regional information on emissions or pollution.

But we can use modelling to build a picture of the environmental situation at regional scale. This can help with identifying pollution hot-spots and potentially useful sample sites.

In Germany, microplastic in agricultural soils comes from sewage sludge, compost and from plastic films used in agricultural production (for example, mulch film in vegetable growing).

Farmers apply sewage sludge to use its organic matter and nutrients, including nitrogen and phosphor, as organic fertiliser for crops. Microplastics such as textile fibres from clothes or microbeads from cleaning and cosmetic products enter the sewage sludge via waste water. This means high concentrations are found close to regions with significant population density and with a strong application rate for sewage sludge in agriculture, like Hanover in the mid-north.

Microplastics enter compost as fragments from plastic food packaging in collected biowaste or from plastic littering along parks or highways. Compost is applied for the same reason as sewage sludge. High concentrations of microplastic pollution from compost are identified in densely populated regions where biowaste is used agriculturally, for example around Cologne.

Microplastic from plastic films enters the soil when the film is damaged, for example when removing or changing it. Mulch film is applied in different production systems for vegetables to protect fruit, maintain soil temperature and humidity and to prevent erosion and weeds. Pollution from plastic films is very high in regions where vegetables are grown under mulch film such as the areas south of Berlin or north-east of Munich.

Our modelling shows that the concentrations of microplastic from applied sewage sludge are higher than those found in areas where it comes from compost and plasticulture. Depending on their location, some hot-spots could be more critical than others, for example, if they are close to rivers and lakes.

These findings can help to identify high-risk areas as focus regions for further soil sampling and analysis.

In situations where empirical information on microplastic pollution is rare, model-based analysis is a complementary tool we can use assess the situation, both currently and in the future. But the results require continuous updating according to new knowledge on quantities and impacts of microplastic in soils.

Regional results can also feed into other simulation models, which, for example, simulate microplastic transport via river systems to the sea. This approach is already in use for other environmental pollution problems including nitrogen and phosphor emissions.

Our general lack of knowledge on the scale of microplastic pollution requires rapid progress in research.

More evidence is required to evaluate the situation and decide whether there is a need for new environmental policies to tackle the problem. Until then, farmers will face the conflict of recycling biowaste as fertiliser for the sake of the circular economy, all while polluting their fields with unknown substances.