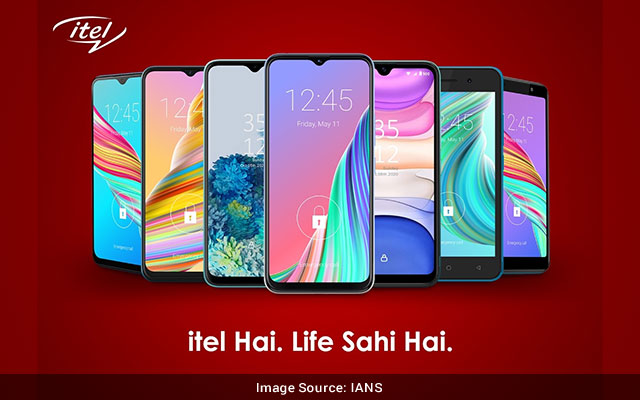 New Delhi: Over the course of the pandemic, the smartphone (in the sub-Rs-7,000 segment) has been a key enabler of human lives in India, and itel is most popular brand as per new survey findings from CyberMedia Research (CMR).

In the pandemic year, Indians spend over 522 hours on online education, and over 738 hours on infotainment on their smartphones. In the sub-Rs 7,000 smartphone segment, consumers seek the best-in-class specs, and value for money offerings. itel has made rapid gains in the India smartphone market and is now a clear leader, said the ‘CMR Insights on the go’ survey.

itel leads the competition in this smartphone segment, in terms of current brand satisfaction, advocacy and future consideration. itel users are most satisfied with its product quality, price and value for money. itel has the highest NPS (60 per cent) followed by realme (58 per cent) and Xiaomi (54 per cent).

“We are happy to know that itel has been able to build the highest brand consideration in the Rs 7,000 segment from our discerning consumer base. In the new world order where smartphones have become a necessity, our singular objective of democratizing technology for the masses is empowering new India to seamlessly continue with their daily lives in a true sense. Consumers have shown strong affinity towards itel consistently and this has led to us being recommended within their friends and family, which is our true strength,” Arijeet Talapatra, CEO, TRANSSION India said in a statement.

According to Talapatra, this vision and continued focus on product innovation, in-depth consumer understanding, our localized market connect interventions and programmes are the key pillars behind itel’s success story in India.

“To make smartphones accessible and affordable, in the recent past, itel has collaborated to offer technologically advanced smartphones bundled with Jio service offerings to empower the value-seeking consumer segment. itel in this year launched itel A23 Pro and reloaded itel A48 smartphones to bridge the digital divide by making devices accessible at an ultra-affordable proposition. Multiple partnered devices are being launched, tailored to offer a portfolio across segments which will further enable accelerated migration of consumers towards a true Digital India vision,” Talapatra added.

“Over the course of the pandemic, the smartphone has been a key conduit for enabling human lives. Whether it be online education, digital payments, or consuming infotainment, the smartphone has enabled consumers across Urban and Aspirational (Tier-III cities and beyond),” said Prabhu Ram, Head- Industry Intelligence Group (IIG), CMR.

“For the value-conscious buyers in the sub-Rs 7,000 smartphone segment, smartphone brands, such as itel, have consistently focused on bringing increasingly accessible and affordable smartphones, packed with the best-in-class trendy innovations, that enable the consumers to connect with India’s growing digital economy,” Ram added.

According to Satya Sundar Mohanty, Head- Industry Consulting Group (ICG), CMR, “For consumers in the sub-Rs 7,000 smartphone segment, the top three key considerations for smartphones include accessibility, affordability and availability. They trust smartphone brands that offer durable devices, focus on trendy smartphone specs, and deliver on reliable after-sales. Brands, such as itel, that are able to deliver on these fronts are the real winners with the highest net-promoter score in the price segment.”