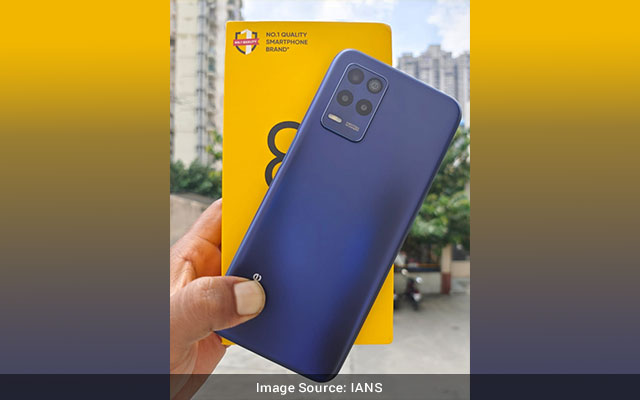 New Delhi: Following the successful launch of the realme GT 5G series, the global smartphone brand realme is aiming to cater to more users with the launch of realme 8s 5G and realmi8i  amid the upcoming festive season in the country.

The company has recently launched the realme 8s 5G and realme 8i  smartphones.

Particularly, realme 8s 5G is powered by the world’s first MediaTek Dimensity 810 5G processor. It also features a lot of other interesting features.

We used its 8GB+128GB storage variant for a while and here’s how it fared.

The smartphone with the universe blue colour variant that we used has looked classy. It is light weighted and has a camera bump on the back. It has a punch-hole selfie sensor on the front with slim bezels.

We found that the smartphone can easily be used single-handedly.

It has a 600 nits brightness peak, even in the bright light. The content on the screen is clearly visible as we did not face any issues. The colour reproduction remained intact even when we viewed the screen from different angles.

As far as cameras are concerned, the smartphone comes packed with a triple rear camera setup that houses a 64MP primary sensor and two 2MP sensors for black and white and macro photography.

We found that the images clicked from the rear and selfie sensors were crisp and clear under direct sunlight or bright light. However, pictures clicked under low light conditions were a little pixelated. But, the camera app has a variety of night filters that might surely help you click some amazing pictures.

Indeed the smartphone is powered by the world’s first MediaTek Dimensity 810 5G processor. It offers a comprehensive suite of connectivity features to ensure faster, more reliable connections on both 5G SIM slots.

In terms of gaming, we noticed that the device is ideal for gaming as it could handle most mid-to-heavy games compared to other phones in this segment and it did not lag while multitasking.A

The smartphone features a side fingerprint scanner, which ingeniously fuses the power button and fingerprint recognition modules. With a capacitive recognition system, just one press unlocks the phone instantly and also provides more security.

The smartphone packs a 5,000mAh battery that supports 33W Dart Charge fast charging, which did a good job too as it lasted around a day on a single charge on normal usage that included messaging, calling, mails, clicking few pictures, etc.

Conclusion: The mid-range realme 8s 5G can be a nice option for many as it has a powerful chipset, strong battery along with featuring other solid internals. This smartphone can give strong competition to others in the same price segment.