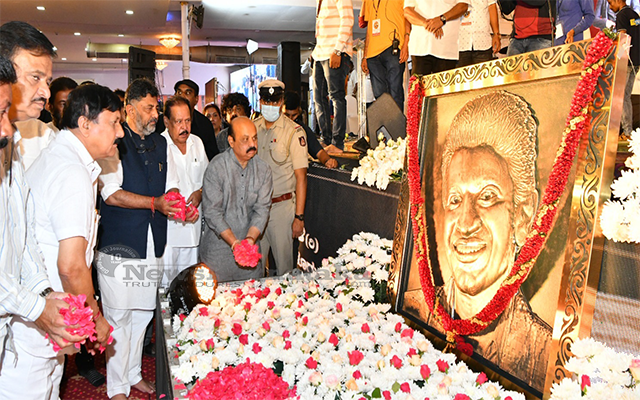 Bengaluru: Chief Minister Basavaraj Bommai announced at a programme, Puneetha Namana at the Palace Grounds in the City on Tuesday November 16 that late actor Puneeth Rajkumar would be conferred with Karnataka Ratna, the highest civilian award in the State, posthumously.

“Apart from this honour, my cabinet will also take decisions on getting national awards and honours for Puneeth. A memorial too would be built in the honour of Puneeth to make his name and memories immortal,” Bommai declared.

Recalling his association with Appu, as Puneeth was fondly called, the Chief Minister said, “he was close to me. He was a fountain of talent and it was evident from his childhood days itself. He has the distinction of being the only actor who got the national award as a child artist.”

“It was wonderful to watch how Puneeth as a child actor used to incarnate himself in to the character overcoming the father-son relationship while acting with his late father Dr Rajkumar,” he said.

Thanking Puneeth’s fans for the manner in which they conducted themselves after his death and during his funeral, Bommai said as the saying goes “Sharanarannu Maranadalli Nodu”, see the greatness of a man in his death, it reflected the great character and personality of Puneeth.

The country has a vast history, but there were very few who had the real great character. “Appu has made it to history as a man of such character,” the Chief Minister said.

Recalling his gesture of kissing Appu’s forehead while he paid his last respects to Puneeth before the funeral rites, which drew diverse comments, the Chief Minister clarified, “it was from my heart. I gave the kiss on behalf of 6 crore people of the state,” he said.

Bommai profusely thanked Dr Rajkumar’s family members, their fans and personnel of various departments of the government for their cooperation in enabling a smooth and dignified funeral for Puneeth.

The programme was organised under the aegis of the Karnataka Film Chamber of Commerce. The actor will be the 10th recipient of the award. Puneeth Rajkumar passed away at the age of 46 following a cardiac arrest on October 29.

The last recipient of the award was Dharmasthala Dharmadhikari D. Veerendra Heggade, who was conferred the award in 2009.