Dr. Moodambail Ravi Shetty is more than just a name to his peers, well-wishers, and Kannadigas across the globe. Fondly called as Ravi Anna, he has explored and established himself to be a successful businessman. Despite this, he has maintained a calm, humble, and approachable personality, making him an excellent role model for all Kannadigas.

As a philanthropist and environmentalist, he has impacted the lives of thousands of people both in Qatar and India. He has thus made a name for himself through his unending support and contribution towards communities and elevating their life to a better position in a professional manner.

Hailing from Moodambail in Bantwal Taluk of Dakshina Kannada, Shetty was born as the first child of Late Moodambail Thimmappa Shetty and Doninjeguthu Sarojini T. Shetty on December 4, 1963.

He stood out as the best academic performer in just about any institution where he studied. Excelling in academics and dedication led Shetty’s rise to the position of Managing Director of Advanced Technical Services (ATS) in Qatar gradually. This was also owing to his passion, dedication, and honesty, which he has carried with him wherever he went.

Shetty managed to secure the highest mark in the SSLC exam, which laid the first foundation stone to the many achievements that awaited in his life. He did his pre-university studies at SVS College Bantwal. As he was determined to chase his dreams, he chose to pursue his professional studies in Mechanical Engineering from SDM Engineering College, Dharwad.

His outstanding academic performance earned him a trainee position in Simon Carves India Ltd. at their Mazgaon Dock (MDL) Yard in Mangaluru. Later he joined Tata Projects in Mumbai in 1987. He was fortunate enough to travel for other projects around India until settling at their Hyderabad headquarters, where he remained until 1997. It was after this that Ravi Shetty re-located to Doha, Qatar in 1997 and began working as a senior engineer for MECON (Mannai Corporation). His passion for work and unwavering dedication soon helped him ascend the corporate world and he was promoted to Proposals Manager. He was in-charge of gaining many large contracts from both domestic and international companies. Later, he set out to start his own business. By then he had 20 years of projects and construction experience in the oil and gas industries in India and the Middle East.

In 2006, he founded Advanced Technical Services Co. WLL (ATS) after carefully studying the basics of business. The company was started with a vision of providing professional and efficient services to Qatari industries through construction projects, highly skilled manpower, plant and machinery, construction consumables, camp furnishing materials, and specialised services, either directly or through the representation of international companies.

It is incredible to know that his passion for business led him to complete his MBA alongside his business. He also holds a Honorary Doctorate for Social Responsibility with Business Excellence from King’s University USA.

Giving back to society

Shetty has always been driven by the idea of giving back to society and Kannadigas in his own unique way. This aided him to contribute in whatever small way he could for the development of the society, his native land and its people. ATS Qatar which was started with just one person today employed more than 400 people before the pandemic. He said that half of his workforce comprises people belonging to Karnataka. He also said that he was well aware of his corporate social responsibilities right from the inception and it has helped him in providing employment opportunities to more than 2000 people.

He has been the flag bearer of promoting native culture and art forms in Qatar. It was through ATS and community associations such as Tulu Koota Qatar, Bunts Qatar and Karnataka Sangha Qatar that Shetty first introduced “Yakshagana” in Qatar. 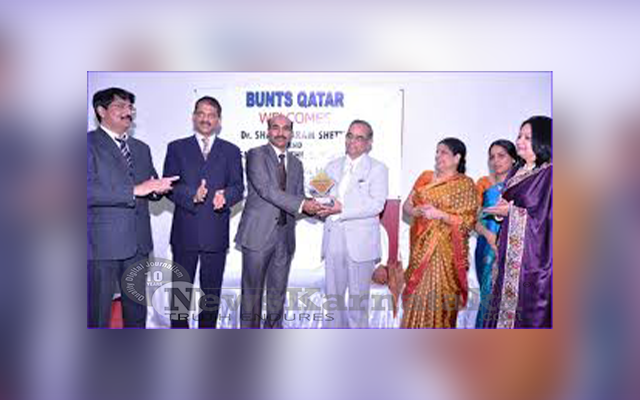 During his first term presidency of Tulu Koota Qatar from 2008 to 2010, he was crucial in organising the inaugural tournament of the famous ‘Game of Kabaddi’ in Qatar. This is currently one of Qatar’s most important annual sporting events. It is also incredible to notice that ATS, has given native Kabaddi players job opportunities.

The Ministry of Environment and the Indian Embassy together organised the “Environmental Awareness Campaign” in 2014. Despite the fact that more than a hundred Indian Expatriate Community Associations participated in the campaign, Tulu Koota Qatar and Karnataka Sangha Qatar shared first place. As President of Tulu Koota Qatar at the time in his second term, he was instrumental in encouraging and inspiring community members to participate in the campaign.

Dr. Moodambail Ravi Shetty has been planting saplings in India and Qatar for many years. He also holds ‘Beach Cleaning’ Campaigns regularly. He also assists in the planting of over 500 seedlings as part of the Vanamahotsava programme at Subraya Temple near Puttur which has become annual event.

His company ATS supports as Main Sponsor and support sponsors on case to case basis to many Karnataka based community associations in Qatar including Apex bodies ICC, ICBF under the aegis of Embassy of India in Qatar. The sponsorship support is being extended to native community associations as well. He has also started special needs cells in Tulu Koota and Bunts Qatar through which financial and moral support are extended to many people in distress in Qatar and India.

While he tries his best to help every sincere request he receives, he is especially concerned about the people who are bedridden for the rest of their lives. He has personally visited more than a dozen such patients from Kundapur to Subrahmanya and extends them support constantly. He has also donated a vehicle to Jayaram near Kundapur for his monthly rental revenue who has been on the bed for 29 years now.  Shetty takes care of the complete treatment of another patient near Puttur which in excess of Rs. 5 lakh. He also supports another bedridden patients’ family and this list goes on. Shetty never forgot his roots. He has stood with the people in both good and bad times. One such contribution was when Karnataka was facing a lot of problems during the outbreak of Covid – 19, he provided Covid-19 health kits, ration kits, and monetary assistance to ASHA volunteers of Mundoor, Punacha, and Gurupura villages and also to many artists regularly. He also donated Rs. 5 lakh to the Chief Minister’s Covid Relief Fund. This was just one of the many humanitarian works Shetty has done. Few years back when Karnataka was affected with severe flood he personally visited worst affected Coorg and coordinated with all Karnataka based Qatar associations and donated Rs. 15 lakh to Chief Minister’s Relief fund.

“The struggle was real”

Ravi Shetty built his empire by overcoming a lot of obstacles. The saying “Nothing could stop you from getting something if you are dedicated,” motivated him to overcome each hurdle in his life. Being the first businessman in the family, Shetty was blessed with the constant support of his parents and his life partner Sujyothi and two kids, Roshan Shetty and Rachana Shetty.

He has received numerous awards, including the Dakshina Kannada Zilla Rajyotsava Prashasti for social service, the International Aryabhata award for social work, Abhyantarashree award by Karnataka Sangha Qatar on the occasion of Bharat Ratna Sir M. Visvesvaraya’s birthday, and the Rajataranga award by Kalasampada Mumbai. He is also the recipient of the Nelson Mandela Award for Humanity and the Rastra Prerna Award.

He is also the recipient of many awards for his philanthropy in India and abroad including Mother Teresa Social Harmony Award, Golden Achievement Awards Doha first edition-2017 and Qatar NRI Awards by Kairali TV for Business Excellence with social responsibility and so on.

Shetty vows to live his life by Mother Teresa’s words, “A life not lived for others is not a life.” He expressed that he is grateful for all the unending blessings God has showered upon him and his family. He advises to serve the poor and needy. “People should also do their best to achieve their goals, and they should never harm anyone in their lives. Also, we are what we are because of our body, and we must take care of our health,” he added.

Ravi Shetty, who has reached the peak of success, attributes his achievement to the dedication and sincere services of his employees. However, every team, requires a leader who they can look up to and be motivated by and Dr. Ravi Shetty has evolved into just that.

Shetty became a great businessman through sheer willpower and dedication, and he has won the hearts of many through his humanitarian activities and social responsibilities both in India and Qatar. It’s fascinating to see how he’s grown into someone every Kannadiga can be proud of.