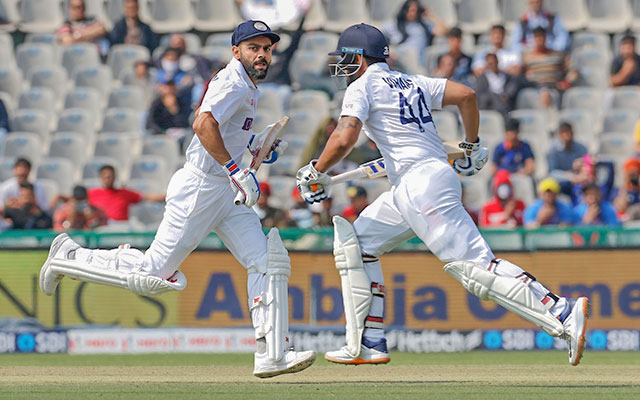 Mohali: After a lacklustre start to the opening Test at the IS Bindra PCA Stadium on Friday, Sri Lanka bounced back in the second session with scalps of well-set batters Hanuma Vihari and Virat Kohli. At tea on day one, India are 199/4 in 53 overs with Rishabh Pant (12 not out) and Shreyas Iyer (14 not out) at the crease.

The first hour of the session didn’t yield any wickets for Sri Lanka. But they persevered hard to get two scalps in the second hour. The session began with Hanuma Vihari gently driving a full toss from Lasith Embuldeniya down the ground. Vihari and Virat Kohli slammed boundaries and looked at ease to bring up the fifty of the partnership for the third wicket.

Vihari reached his maiden fifty at number three position in 93 balls with a single through fine leg off Lahiru Kumara. After India went past 150, Kohli, with his 38th run, brought up his 8000th run in Test cricket with a neat single through point off Vishwa Fernando.

It made Kohli the second player after Australia’s Ricky Ponting to reach 8000 runs in 100th Test.

The 90-run partnership between Vihari and Kohli came to an end as Embuldeniya got the latter out for 45. The left-arm spinner got a fuller ball to turn just a little bit past Kohli’s outer edge, trying to defend on back-foot, to hit the top of off-stump.

Three overs later, Vihari aimed to drive away from the body but chopped on to his stumps off Fernando. Losing two wickets in quick succession pushed India on the back-foot. But Pant, promoted to five in order to counter Embuldeniya, walloped the left-arm spinner over long-on and added 24 with Iyer to leave India on the verge of reaching 200.

Earlier, India were quick in racing to 62/1 at the end of first hour with Sri Lanka finding some movement from the pitch. It was a totally dominant show by the opening pair of Sharma and Agarwal as the duo made the most of wayward line and length from Sri Lanka bowlers.

But Sharma fell while trying to pull off Lahiru Kumara to fine leg, falling yet again while trying to unfurl his favourite shot after doing so twice in the over. Agarwal prod forward and beaten on the inner edge off Lasith Embuldeniya, trapping him plumb lbw. Vihari and Kohli tightened India’s grip on the proceedings till they were separated in the second session.