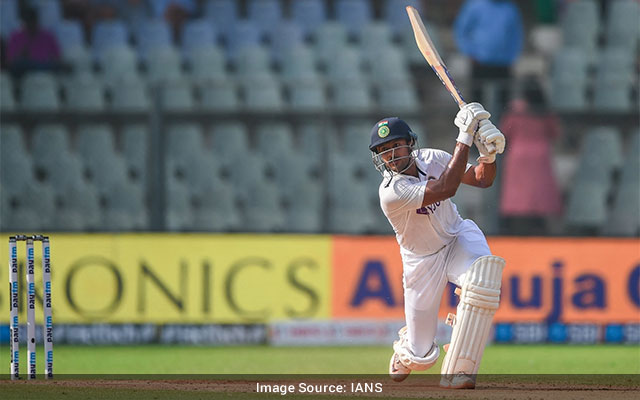 Mumbai: Former India batting coach Sanjay Bangar believes that Mayank Agarwal’s comeback into Test cricket is a big achievement for the right-handed opener. He added Agarwal did well to counter the turn and bounce of the pitch in the second Test at the Wankhede Stadium, especially when Tim Southee and Ajaz Patel were operating.

“Mayank Agarwal’s batting style was commendable. He very efficiently countered Wankhede’s pitch which had a lot of turn and bounce. The way he approached and encountered Tim Southee was the highlight of the match, because Southee was someone who troubled us a lot in the first Test match. Mayank showed a lot of discipline against pacers and scored a lot of runs against spinners, especially against Ajaz Patel,” said Bangar on Follow The Blues show on Star Sports.

Agarwal was awarded the Player of the Match for his superlative knocks of 150 and 62 in India winning the match by 372 runs and clinching the series 1-0. Agarwal got his chance to open alongside Shubman Gill after Rohit Sharma and KL Rahul were unavailable due to rest and injury, respectively.

“I think Ajaz is a bowler who pitches a ball higher and whenever he has pitched the ball higher, Mayank Agarwal has used this opportunity to use his feet and play aerial shots. He has played long shots with the turn and which is why I think this is a big achievement for Mayank Agarwal – the way he has made his comeback in Test cricket,” added Bangar, who played 12 Tests and 15 ODIs for India.

Former India batter VVS Laxman pointed out that difference in run-making from Agarwal in Kanpur, where he made 13 and 17, and Mumbai was due to technical adjustments.

“I think the difference between Kanpur and Mumbai was, that there were slight technical adjustments he made, more so he trusted the game plan against Kyle Jamieson and Tim Southee. Because in Kanpur in both the innings he got out at balls that were pitching on and outside the off stump, whereas in Mumbai, especially in the first innings, he was ready to leave a lot of deliveries.

“He was keeping his front foot in the pitch of the ball and he was playing with a lot of discipline. But when the spinners came in he was using his feet a lot and I think he played with a mindset, which is similar to what he used to play in first-class and international cricket. He has given a lot of importance to self-belief and it was great to see him coming in and expressing himself, and that’s why he hit some outstanding shots, especially against Ajaz Patel. His shot over long off and over extra cover for sixes are probably the best shots of his innings.”

Agarwal has been named in the Test squad for the three-match series against South Africa, starting from December 26 at Centurion.