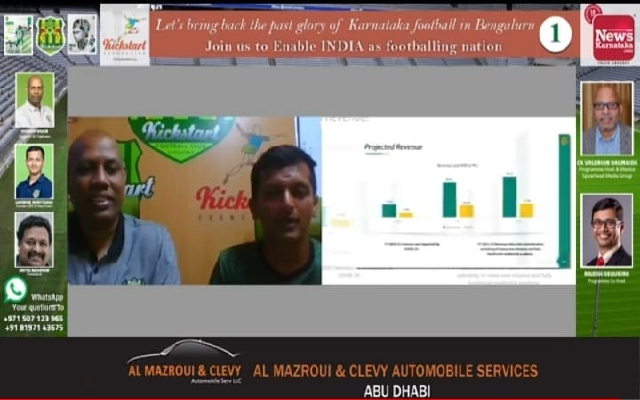 Dubai: Newskarnataka featured Kickstart Foundation on Thursday, October 21 at 8.00 pm IST, live from Dubai. The programme is envisioned to bring back the past glory of football in Karnataka and to enable India as a footballing nation.

People across the world can watch this week’s interesting talk show in the link given below.

Shekhar Rajan, Founder and Chairman, Laxman Bhattarai, Founder CEO and Head Coach, and Satya Narayan, President of Kickstart Foundation were the guests for the event.

The host for the event were Spearhead Media Group Mentor and Advisor CA Valerian Dalmaida, and the co-host Rajesh Sequeira.

”Many are interested in football and to encourage such talent we have begun Kickstart Academy. We are here giving professional training for foot ball players. We have named the academy as Kickstart because every good thing should get a good kick in the beginning. We have both men and women team in our academy. After Indian Super League many people in Bengaluru as well as Karnataka got interested in football. Further, football is a very good game which provides exercise to our muscles, said Laxman, Head Coach and Academy Founder.

Shekhar Rajan said, “Kickstart Foundation is an independent NGO headed by Satyanarayan. It is a non-profitable foundation that provides football training. During Covid pandemic we closed our academy but parents forced us to open the academy. As soon as we started the academy 40 children came to us. The women’s team is also playing their best, he added.

He said, ”our academy is academic-friendly. As we have internet facility at the academy, the students can attend their online classes along with football training. We develop our students’ communication skills and public speaking among others. We are associated with many big schools in Karnataka.”

Satyanarayan said, ”Football needs good ground but many players are practicing in the muddy grounds. Nikhil Raj from our academy has been selected for under – 19 World Cup of 2023.“

He further said, ”we won’t compromise when it comes to quality coaching. We are providing training to kids as young as 4 years old. Many people from various parts of Karnataka and also from other states are requesting us to start the academy in their cities. We aim at producing as many professional players from the State.“

“We are mixing the European and Indian styles of playing to get better results. We have untouch policy in our academy for the safety of girls. Here we have many girls from Bengaluru, Belagavi, and Kodagu among others. A girl named Kavya from our academy has got ‘A’ license while many people are struggling for ‘B’ license. We have 3 women who have completed their PhD and many others are graduates and postgraduates. Our women team is more powerful than men’s team. And also women are better coaches compared to men,” said Satyanarayan.

The trio said that the Kickstart FC – Karnataka, which is a Private Limited Company is interested in crowd-funding, and hence anyone who are interested to invest in the academy may contact Kickstart Foundation. One of the Netherland Clubs has offered to acquire 30% stake, but Kickstart wants to go to them in 2023-24 with better valuation. Right now they would crowd fund 20% stake which they can exit or hold in 2023-24 at better price.