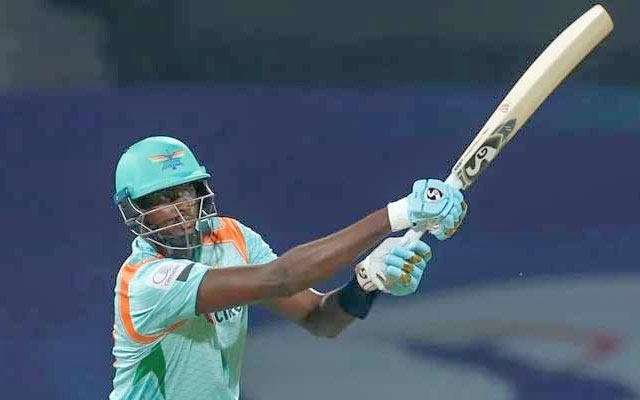 Bishnoi and Gowtham tightened the screws on Delhi Capitals in the middle overs once Prithvi Shaw got out, fetching figures of 2/22 and 1/23 in their respective four overs as Delhi managed to post only 149/3 in their 20 overs. Though Delhi took the match to the final over of the run-chase, Lucknow reached the target with two balls to spare.

“We’ve got some clever spinners. Bishnoi was excellent for us. Gowtham coming in for his first game was excellent as well. Their overs really changed the game for us. Andrew Tye came in at the backend of the powerplay and into the middle overs and did an outstanding job for us as well. It was just a real team effort, the way we fought back. Credit to each and every individual,” said Holder in the post-match virtual press conference.

Gowtham was drafted into the playing eleven in place of his Karnataka team-mate Manish Pandey. Although he was hit for two fours by Prithvi Shaw in the second over of the first innings and was smacked for four and six in the eighth over, Gowtham came back strongly to take out Shaw on the third ball of the over, breaking the 67-run opening partnership which turned out to be the turning point of the match.

Gowtham signed off from the night by bowling a fine maiden over against Delhi captain Rishabh Pant.

“I guess you have to ask the skipper (KL Rahul) that question. He (Gowtham) was picked to bowl and he is a capable batsman as well too. We really needed his four overs and he was able to come in and break the partnership for us. In T20 cricket, it’s not about how you start, but more or less how you finish. Any bowler can get hit at any stage of any match. It’s just a matter of staying composed and getting through to finish your remaining overs properly,” observed Holder.

Holder then explained how Lucknow plotted the comeback after being hammered in the first six overs, when Delhi seemed to be running away with the game.

“After I bowled the first over, I said to the guys there wasn’t much swing and conceded 14 runs in that over. I knew that we needed to be really tight in the powerplay. It was that kind of a wicket where you can get on top of the bowlers in the powerplay because there is not much swing. Although they got a really good start, we knew we could peg them back in the middle.”

Holder, who had figures of 0/30 in his four overs, signed off by saying that his plan was to get the yorkers bang on in the last five overs, depriving Delhi of the much-needed finishing touch.

“Just tried to mix it up as much as possible. The nature of the wicket was such that a few balls gripped and then it was just about nailing yorkers at the backend. Just tried not to be too predictable and be as versatile as I possibly can.”

See also  It was CA's decision to not put Paine's investigation in public domain: Taylor