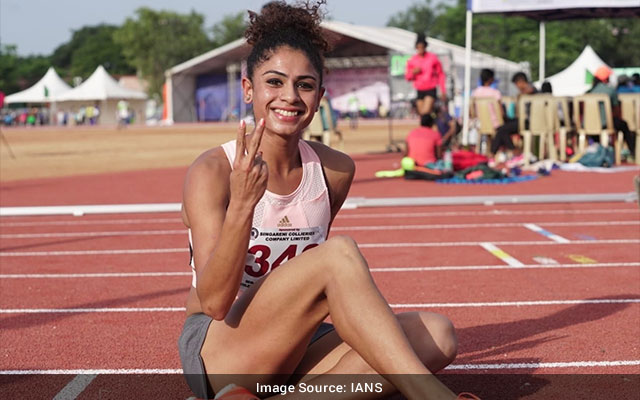 Harmilan added the 800m crown to the 1500m title she won a couple of days earlier here while Aishwarya won the Triple Jump title less than 24 hours after claiming the Long Jump title.

To her credit, Aishwarya won both events with the best efforts of the year by an Indian woman jumper. The Railways athlete, who won the Long Jump with a leap of 6.52m, edged out Renu Grewal (Haryana) by 4cm to double her joy.

Harmilan Kaur Bains, 23, drew on her stamina and speed to show a clean pair of heels to Delhi runner KM Chanda for the fourth successive time this year. The Punjab athlete had won the 800-1500 double in the National Inter-State Championships in Patiala in June and though Chanda employed different tactics here, the Punjab runner was ready and emerged on top.

In a keen battle at the Triple Jump pit, it was Renu Grewal who led the competition at the halfway stage, with an effort with 13.42m on her third attempt to improve on her ow’ season’s best effort of 13.39m. Aishwarya, whose best in the first three jumps was a 13.31m, responded with two jumps past that mark, logging 13.49m and 13.55m for a new personal best. Hard as the Haryana jumper tried on her last attempt, she could only get to 13.51m.

There was joy for Services when its athletes swept all podium places in the men’s 800m and the gruelling 50km Race Walk to complete a hat-trick after it send out all three medallists in the men’s 3000m Steeplechase on Friday. Mohammed Afsal showed lasting power to edge ahead of Ankesh Chaudhary and Krishan Kumar in the 800m final.

There was more good news for Services camp when Pole Vaulter S Siva improved on his own Meet Record, raising it to 5.12m from the 5.10m that he had cleared in Ranchi in October 2019.

In the Heptathlon contest, Akshatha made light of the 118-point first-day gap with Sowmiya Murugan (Railways) with a good show at the long jump pit where she logged 5.88m. Sowmiya Murugan regained the lead with a 37.32m effort in Javelin Throw but the Kar’ataka athlete’s won the 800m by a 6.63 seconds margin to win t’e all-rounder’s crown with a 46-point margin. Haryana’s Sonu Kumari too may have upstaged Sowmiya Murugan had she been able to muster a slightly better distance with the Javelin Throw. She ended up a mere four points behind the Railways all-rounder.

Earlier, Railways’ counter-protest against Delhi in the Mixed team 4x400m relay was upheld by the Jury and it was reinstated in the silver medal position behind Tamil Nadu. Railways argued that its third-leg runner, Kiran Pahal, was forced to step inside the kerb as a result of being’pushed by Delhi’s Pooja soon after they set off on their runs. Delhi returned fourth place.