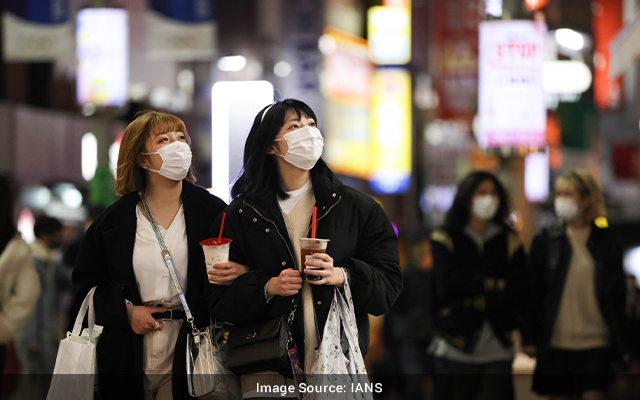 Tokyo: Japan plans to raise its daily cap on foreign arrivals to around 10,000 starting from Sunday April 10, up from the current 7,000, as the country further relaxes coronavirus border controls, a top Government spokesman said.

“Japan plans to increase international movements of people in stages by taking into account the infection situation at home and abroad and border control measures that other major nations have taken,” Chief Cabinet Secretary Hirokazu Matsuno said at a press conference.

The latest decision came as the need has been growing among returning Japanese nationals and foreign visitors to enter the country, including students who wish to stay, reports Xinhua news agency.

However, foreign tourists are still exceptions.

Japan has recently been easing what Prime Minister Fumio Kishida called the “most stringent” border controls among the G7 nations.

The daily entry limit was raised by 2,000 to the current 7,000 in mid-March, ahead of the start of the new Japanese school and business year in April.

The country effectively imposed an entry ban on non-resident foreign nationals in November 2021 to curb the spread of the highly transmissible Omicron variant.

The strict measures drew criticism from students, academics and business circles who claimed that the measures were too stringent.

The restrictions have prevented foreign students from entering Japan, with around 150,000 said to be waiting as of March 1.

So far, over 10,000 of them have arrived in Japan, according to Matsuno.

The government has prioritised foreign students in its border relaxation by allocating empty seats on weekday flights to help them enter smoothly.

Also on Friday, Japan eased its travel warning for 106 countries and regions including the UK, France and Germany, India and the US.

Japan had previously been advising nationals not to travel to those areas.